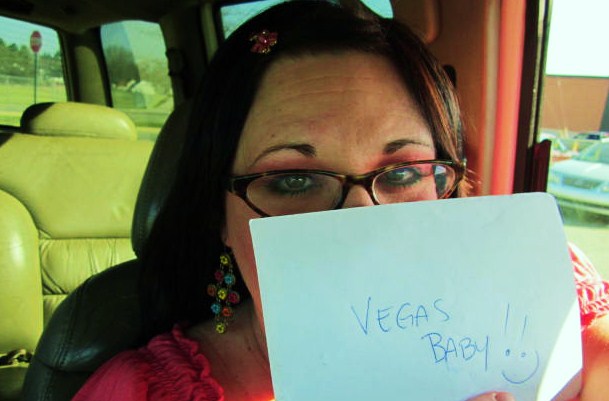 Kat Nove and I managed to return from our whirlwind trip to Las Vegas without getting arrested, tasered, or contracting any sort of communicable diseases.

We received a bunch of great dares and performed some of them (mostly Kat) but chose to skip some because of lack of time, patience or inclination. There were plenty of “Put a Little Rudd In It” moments, which you can see on the video below, as well as Kat snagging leftover food from abandoned restaurant tables. (Thanks, Kay!)

Below is a list of Scavenger Hunt dares submitted by Twitter friend Diane, as well as our “excuses” for why we might not have attempted some:


1. Down a shot (or have anything alcoholic) at each of the following locations!

KAT: Taking shots at every place on the scavenger hunt was just asking for the early release of Hangover 3, starring Miss Calculate and Boozy McBoobs. I did have a beer in every casino where I could get one for free. (Memo to Casinos: Hire more cocktail waitresses!) Jeni was a total puss and drank club soda all weekend.

JENI: I was dehydrated!

2. Don’t want you wasting away.  Better go get re-hydrated and don’t forget the salt!

KAT: Not sure, but we think you wanted us to go to Tacos and Tequila at the Luxor. That’s a long walk from the Mirage. I lost a shit-load of money at the Luxor while it was under construction and I'm still pissed about it. Screw the Pharaohs!

JENI: I only eat tacos prepared by myself. You have no idea what they put in those things. No idea! 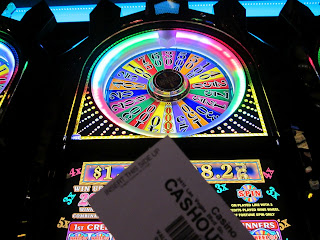 KAT: We lost approximately the same amount of money playing Wheel of Fortune that Vanna White spends on facelifts.

JENI: We may have lost gobs of money, but I got all tingly down there every time I hit SPIN and the canned audience applause commenced.


4. You won’t have to worry about Gladiators anymore, but on occasion you may hear the Titanic, Marilyn or Maggie playing.

KAT: We spent some time speaking Italian to some statue’s penis at Caesar’s Palace. We believe that fulfills this portion of the scavenger hunt.

JENI: Said penis conversation will be posted soon and will double as our plea to the producers of The Amazing Race. Kat insists we get on the show - probably so that millions of viewers can see how out of shape I am - right before I keel over and die, garnering huge ratings.


5. Don’t expect to get your youth back or meet the cast of Ocean’s Eleven here.

KAT: We made it to the Bellagio, we stayed at the Mirage, but once again, the MGM Grand was a bit far to walk. Let’s blame Jeni.

JENI: I told you MY ANKLE HURT!


6. A tropical rainforest with waterfalls, lush vegetation and indigenous creatures in Vegas.

KAT: We saw three indigenous roaches at the Mirage. Okay, so we’re lying. The Mirage was a nice place to stay. We backed out of the habitat because it was $17.50 for hotel guests and that money was better spent on gambling!

JENI: I have the National Geographic channel at home. That’s as close as I need to get to indigenous creatures of any variety.


7. They are one-half and two-thirds the sizes of the originals.  Be sure to get a “Sugar” fix while you’re there. 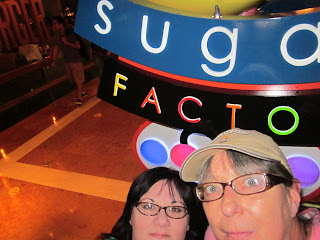 KAT: We spent just enough time in The Paris for Jeni to get video of the restroom. The chocolate was cheaper at Walgreens, but we did take our picture at The Sugar Factory.

JENI: I really appreciated the dares that involved us taking a quick snapshot in front of a sign before moving the fuck on to the slot machines.

8. George Clooney (ahhhhhh yes), Whoopi Goldberg, Jerry Springer…”grab hold” of your favorite star and try not to get arrested in the process. 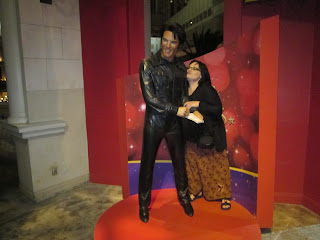 KAT: At Madam Tussaud’s Wax Museum, Jeni placed her hand on Elvis Presley’s ass, which I thought was creepy.

JENI: I may be the only person in the free world who would rather touch Elvis’ wax ass over his real one.


8. If you “Believe” that “Carrots” can improve your vision and lessen your “hot flashes” …have I got a Pyramid scheme for you?

KAT: What’s up with this challenger and the Luxor? Too far to walk... I saw Carrot Top at my last disastrous visit and kept pulling my bra out about six inches because of stabbing pain. Chris Angel’s Believe is there, but at least one of us has no idea who the hell he is. (Me.)

JENI: Have any of you noticed that Kat is passive-aggressively blaming me for all the places we couldn’t hike to? I hurt my ankle on day two! I think I did a magnificent job of pushing through the pain, even with her calling me a pussy seventy-five times a day.

KAT: We didn’t do this, but we did spend $29.99 for a FUCKING buffet our first night at the Mirage. After that, who had ten bucks for steak and eggs?

JENI: I would have eaten Chex Mix all week if it meant having more money to gamble with.

Our other winner, Kay, had a few dare suggestions:

KAT: I looked everywhere for a yapping poodle to squash, but had no luck. I finally sat on the lap of the most adorable old man who had broken his hip. The overexcitement caused him to have a heart attack. We rode in a cab with his adorable old wife to the emergency room, but he was dead on arrival. We consoled her and promised to be at the funeral, but that was a bullshit lie. We didn’t even call to check on her like we promised. You know how you lose track of time in Vegas when you’re having fun.

JENI: Yeah… what she said.


Might there be any interest in eating something found in a food truck/cart's trash bin? Or something left on a discarded table in a restaurant?

KAT: The challenge to eat food off someone else’s plate was no challenge at all. If I don’t have to pay for it, it’s a win/win for me.

JENI: The entire vacation was a win/win for me because Kat did most of the dares. I’ll gladly let her call me a pussy all week if it means she’s the one that has to endure the public humiliation. (See her complete the dare in the video below.)

Random people signing the copies of Waiting for Karl Rove: 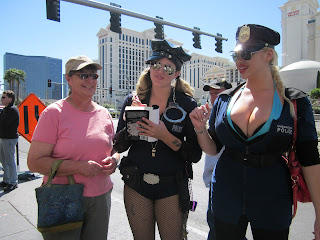 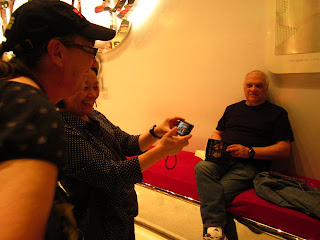 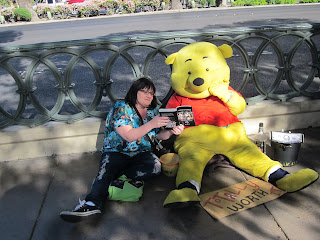 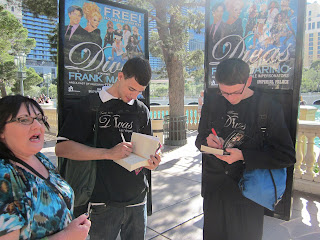 Kat riding the zip-line! (Again, I pussed out.) 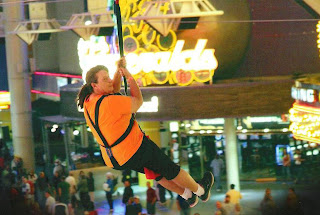 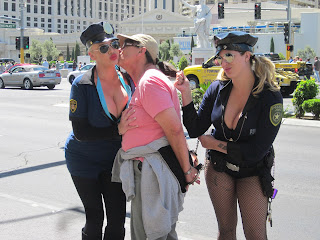 Finally, for those of you who haven’t seen it, here’s the book trailer for Waiting for Karl Rove.


We'll get our Amazing Race Plea up ASAP, as well as a montage of bathrooms where the signed copies of Waiting for Karl Rove spent a little quality time.

Thanks to all who participated in our Vegas Truth or Dare Challenge. We had a fantastic time!
Posted by Jeni Decker at 2:02 PM