Musings on Menopause and Public Farting 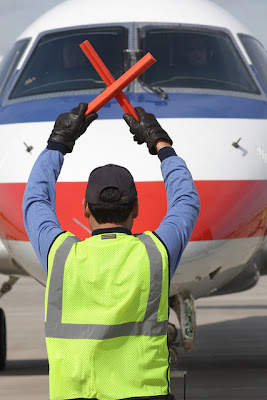 What really got me were his shoes. I sat on a plane, staring out a rain-dappled window at a kid who couldn’t be more than twenty. He was wearing one of those fluorescent yellow vests and held up two orange batons in an X formation over his head, presumably giving some signal to the pilot.
What are these people called, the baton toting people directing airplanes on the runway? I should Google that at some point.*
But I digress…


So, the shoes on this kid (thick soled black sneakers) were untied. Both of them. Here we have a fellow who’d been tasked to do whatever it is one does within the context of getting an airplane off the ground (while holding orange batons) yet he didn’t have the where-fucking-withal to tie his goddamn shoes. The black laces flopped around on the tarmac as he did his arm acrobatics and pointed his batons here and there. Something about that brought me to tears though, if pressed, I couldn’t tell you what, exactly. I sat there dabbing the pads of my fingers into the corners of my eyes, catching the tears before they had a chance to make their pathetic trek down my cheeks and alert my fellow passengers to my sudden onset of what the fuck is going on?
Don’t ask where the tears came from or even their cause. These days they arrive suddenly and unbidden, for reasons that can be attributed to anything from a pile of dirty laundry or a Hallmark commercial to the fact that there’s a diminutive probable psychopath in North Korea who would gladly toss a nuke our way if he got drunk enough one night and was feeling frisky.
So with regard to the sudden waterworks, there’s no rhyme or reason. It’s just hormonal insanity in the form of unwarranted facial precipitation.
I think it’s probably time to check into some sort of herbal something-or-other because this debilitating heaviness that’s suddenly taking up residence over my heart every twenty-eight days or so* suggests I’m sauntering up to full blown menopause with all the finesse of Jason Voorhees spooning someone’s eyes out with an ice cream scoop.

*When Mother Goddamn Nature doesn’t see fit to arrive ridiculously early (or horrifyingly late) with the blood and the crankiness and the existential What the hell does it all mean and why the fuck am I so damn hot all of a sudden?

All these fermenting emotions were syncopated to my throbbing pulse as the bitch sitting across from me fingered her iPhone well after the stewardess made the ‘No Electronics’ announcement, so now I should probably research whether being peri-menopausal is sufficient justification for any negative action attributed to it… you know, for when the bitch decides to become litigious. Because her goddamn phone was bouncing down the center aisle of the plane before I even realized I’d snatched it out of her hand.

Internal Monologue: SHUT OFF YOUR GODDAMN ELECTRONIC DEVICE ON THE PLANE, BITCH! I HAD TO TURN OF MY KINDLE SO YOU CAN’T CALL YOUR MOM AND INQUIRE ABOUT THE CAT!

Apparently blind rage takes no pause and I suddenly have zero fucking tolerance for fuckers who can’t follow a simple goddamn direction IN THE NAME OF COLLECTIVE COMMON DECENCY.

Note: The above didn’t actually happen but I could see it happening and was seconds away from making it happen, so I’m taking metaphorical license to get my point across.

The point is this: The intent was there. Oh so bloody fucking there… Luckily my sanity hasn’t completely eroded. Just yet.
I think it’s safe to assume none of this is going to end well. I can only hope it will prove to be a mildly amusing hormonal transformation.

*Another note: I’ve been informed the airport employees who wear bright vests and wave the batons are called marshallers or rampies - short for ramp agents.

I’d like to know from what kind of socially retarded burg you must have been spawned to assume it’s perfectly acceptable to fart on a crowded airplane.
…repeatedly over the course of one hour and thirty-eight minutes. Seriously, what makes some idiot say to himself, ‘Yeah, I’m gonna let this puppy burble out of my pucker into the faux-leatherette of seat 14A as I casually peruse the Sky Mall catalog.’
The Sky Mall catalog — we’ll get to that ridiculousness in a minute because I’m still trying to wrap my cranium around who it is that conceives and raises the cretin who eventually matures into an airplane farter. Who are these fucks of nature and why isn’t Piers Morgan doing an in-depth interview alongside a statistic-toting medical (or mental health) professional about the nasal affronters in our midst?
The fact is, some of you people are busy raising little people who will one day grow up and think it’s perfectly acceptable to fart just anywhere, willy-nilly.
Listen, I get it. Farting is necessary. Sometimes the only option in public is to let it slide out and hope for the best, particularly when it’s an out-of-your-control type scenario. We’ve all been there. But I’m a human being with average bowel activity and I know it’s possible to stifle such an urge should the physical need arise. Where I draw the line is infringing on the right of another in close proximity to enjoy anything other than my stench-ridden gaseous discharges.

Grocery store farting: Okay, I’ll give you that one. The aisles are big and your victims have the means, motive, and opportunity to get the hell away from you.

Elevator farting: Unacceptable under any circumstance other than you actually wanting to torture your fellow passengers — because there’s no elevator ride in the history of mankind that's so long you can’t hold your fucking air. Seriously, how far you going, mate? Twelve floors? Buck up, tuck it up, then let it slide when you exit. I recommend walking fast and finding a secluded spot because it’s gonna feel so good, an orgasmic moan will emanate from within you — one to which you’ll be entirely unable to do anything but yield.

In the company of friends and family: No problem. They should love you despite your internal stench and in this case, knowing the stinker makes it bearable (even charming in an I-love-you-in-all-your-humanness kind of way) to the stinkee.

Airplane farting: Fucking unacceptable! I can’t get away from your stink, man! (Or woman… I wasn’t able to pin down the sex of the putrid perpetrator on my plane but I’m well aware that women are as prone to the natural funk of humanity as men. I wouldn’t wish my personal gassy prowess on anyone, I assure you.)

So yeah, we’re all allowed those occasions when there’s physically no choice. But I’m beginning to believe there are some who take sadistic pleasure in regaling others with the malodorous byproduct of their digestive process.
It’s like they’re daring others to call them on it! You know who I’m talking about, don’t act like you don’t. We’ve all encountered these offenders and if you say you haven’t then you’re probably one of the offenders in question.
I ask you this, kind (and possibly stinky) reader: How would you like it if I held the strap of my purse, reared my arm back and smacked you in the head with it and its fifteen pounds of various and sundry girly shit? Because that would have the same basic effect as you projecting your putrid ass-gas in some innocent bystander’s direction.
So, here’s the take-away from a hormonal, pre-menopausal female: If I love you, I’m happy to receive you in all your foul-smelling glory — but if I don’t know you like that, please keep your stench to yourself.

When in doubt, don’t let it out.  Consider this the Eleventh Commandment.

Now to the Sky Mall issue: What the actual fuck?
You’ve seen this thing, right? It’s a catalog shoved into the seat-backs of airplanes and if you didn’t have the presence of mind to bring an e-reader or mp3 player are forced to peruse to keep from mentally harping on the fact that you’re just one Swiss Army knife wielding terrorist or bird-in-propeller away from death by fiery jet-fueled inferno.
What I don’t understand is who its target audience is, this odd little catalog. Who opens up this thing and says, “Yes! I must have the iGrow™ helmet immediately because it will help me achieve thicker, fuller looking hair in weeks – Guaranteed!”
($695.00 + shipping and handling)
Or, “Boy howdy, I’ve always wanted to get me one of these here Portable All-In-One Sun-Tracking SunSocket™ Solar Generator’s!"
($1499.00 + shipping and… are you fucking kidding me?)
"I guess I’ll jot this info down and order me one just as soon as we touch down in Dulles and the pilot turns off the Fasten your Seatbelts sign!” — which is now the universally understood signal to passengers that we can collectively power up our iShit.**

Anyway… whatever. Not even sure where I was going with all this. I guess, perhaps, don't fart in public unless you have to... and beware of females embarking upon the joys of menopause. I’ve been experiencing a disconcerting amount of memory loss lately and I don’t even have the energy to end this tirade with something pithy or meaningful.
Send chocolate.