My Name is Jeni and I am a Chickenshit 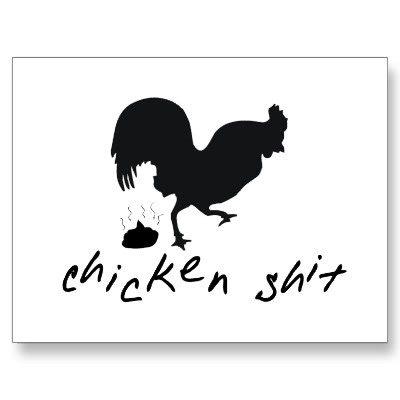 I freely admit it: I am a chickenshit.

(Autocorrect wants me to change that to "chickens hit," which I'm pretty sure they don't do. I've never seen a chicken battering someone with their wings. Autocorrect is stupid.)

So, yeah - chickenshit party of one, my table is ready. Right over there in the corner by the swinging kitchen door. The place where I feel most comfortable: out of the way where nobody will pay attention to me and I can sit and watch everyone else living.

Shhh, don’t tell anyone of my chickenshittery. It'll ruin my street cred. 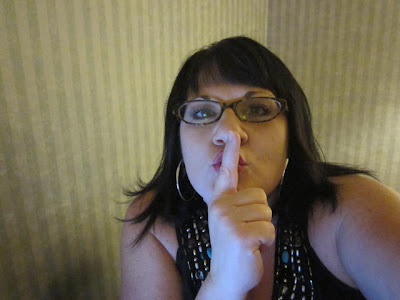 It would be a shame if the truth got out: the gal who has no problem writing a book that delves deeply into the dysfunction of her own life, not to mention graphic descriptions of her own hemorrhoids - the same person who in fiction will gladly explore any and all issues normally considered taboo - that same person is a Chickenshit extraordinaire.

This week I had two out-of-town book signings and I forced myself to go alone; to drive almost three hours to a part of the state I was unfamiliar with, armed only with a suitcase full of clothes, some toiletries and a handful of Mapquest driving directions that ended up being mostly inaccurate.

NOTE: If you're planning a trip and need directions, let me suggest you use Google maps. Mapquest's motto seems to be: Leave the getting you lost to us.

Now, I'm not going to say that I had a panic attack exactly, as I pulled into the very cheap hotel I'd booked in a seedy side of town, (after having gotten slightly lost as I exited the highway into a downtown that was undergoing a huge amount of construction which required numerous detours) got my room key at the front desk, walked up the stairs with my bag, opened the door, entered, and closed the door behind me.

I didn't exactly have a panic attack. I promptly set my bag down and pushed one of the hotel tables in front of the door which was locked, bolted and had that little slide thing that prohibits the door from being opened more than an inch when engaged. 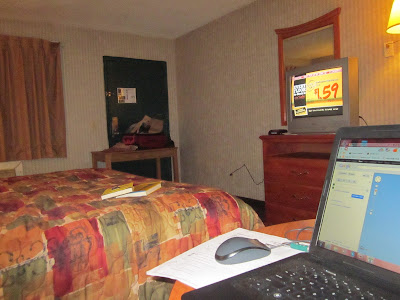 Oh yes, it was engaged.

Still, my first instinct was to rearrange the room so that access to the only exit, in the event of a fire, would be greatly diminished. I was prepared to die in a fire. I was not prepared for someone to come into the room while I slumbered and have their criminal way with me.

Perhaps I've watched too many episodes of 48 Hours on WE. I am acutely aware that being kidnapped, chopped into a few dozen pieces, then mailed to various places of business, is not out of the realm of possibility. It happens.

But something strange occurred over the course of my next 48 hours:

Sometime after I arrived at the first signing only to find that I'd gone to the wrong bookstore location, and had to get a harried set of driving directions from the very kind employee. (Schuler Books and Music in Lansing rocks!)

Sometime after I breezed into the second Schuler Books location fifteen minutes later than the event was supposed to begin, sucking on an iced coffee - which I knew would only exacerbate the symptoms of my impending nervous breakdown.

Some after the lovely, dreadlocked Whitney (amazing event coordinator) made the storewide announcement over the intercom that I had arrived and we all made our way to the rear of the store.

Sometime after I spoke to a very charming group of people for a couple of hours, all the while ignoring my inner monologue that never stopped bleating, "You're blathering; stop speaking so loudly; what the hell did you just say?"

Sometime after I got back to the hotel, took a shower, then sat staring at the table I'd again pulled in front of the door as a barricade.

Sometime after I spent a restless night praying to not be murdered in my sleep, or get lost the next day on the way to the next event (which I did)…

Sometime after I got through the video presentation and chat with the gathered attendees at Delta Township Library in Lansing and headed to my car, wondering if I'd make it back to the hotel on my own, rather than having to resort to stopping at the local gun shop or liquor store for directions… (The fantastic librarian gave me his cell phone number in case I ended up lost and sobbing on the side of the road. Thanks for everything Thomas!)

Sometime after all of my required duties were complete and I got a couple hours of sleep, before heading home the next morning, a crumpled set of written directions from Google maps clutched in my paw…

Sometime after all of that, it occurred to me.

Holy chickenshit, I did it!

About fifteen miles from home I realized I had a huge grin on my face. I felt like I'd just stepped up to a door I was certain I wouldn't be able to open, balled my fists, clenched my teeth and kicked that damn thing off its hinges.

It was a big deal for me. Like my two autistic kids, I'm very afraid of stepping out of my comfort zone. I don't do it if I don't have to. But I realized that if I was going to regularly require my kids to step out of their comfort zones, it was pretty goddamned disingenuous of me if I couldn't do it myself.

I am still a chickenshit. But now I'm a chickenshit who knows she can push through that discomfort and come out the other side feeling like Xena Warrior Goddess Ass Kicker. I'm here to tell you, that feeling was worth two sleepless nights and the worry over being kidnapped, chopped into pieces and having my mutilated remains mailed around the state.

The icing on the cake: "I'm proud of you, Mom," Jake said when I arrived home.

So yeah, totally worth it.

Thanks to everyone at Schuler Books & Music, Delta Township Library in Lansing, and all the wonderful people who were a part of my successful chickenshit weekend, even if you didn't know it.

*Some of the attendees asked if I'd post the video clip I presented so they could pass it along. Here it is: