Shakespeare, but not really 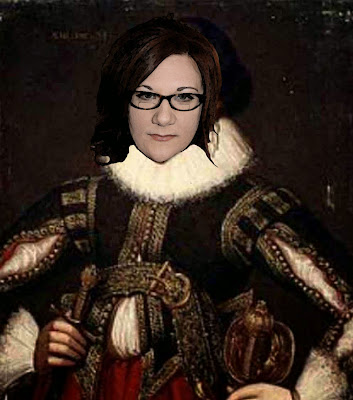 Sometimes when I'm bored, I reimagine some of the Bard's delightful works for shits and giggles. One thing I discovered about the man while wading around in his prose is that he was kind of a wuss. I hope the subject of all his gummy sonnets whacked him upside the head at some point because, dude, man the hell up and quit all the whining for God's sake.

Since I've been a horrible blogger lately, and would rather eat a cockroach than regale you with my mundane daily activties, please enjoy some Shakespeare - pilliaged, plundered and pulvurized.

Shall I compare thee to a Summer's Eve douche?
Thou art not feminine hygiene related, but prone to hibernate.
Less an appetizer than a delightfully arranged amuse-bouche,
served to distinguish the discriminating aggregate.

Accompanied by a complementing brew,
offered, no doubt, but for a rough-hewn glimpse;
a hacking approach to life’s existential stew —
by chance, or nature's changing course and whims.

Like a plate of olives or a crock of tapenade,
‘words be an equally simple tithe;
soothing under pretense to abrade,
and awaken where appetites hide.

In sickeningly-sweet prose did I frame my meandering nattering;
and tired of apathy, found joy in understanding my neediness,
too unsubtle in my revelations, truth so often is unflattering.

Such robust devotion, did plainly illustrate my ills for naught,
and grew to faults assured, too many and too plainly seen,
carried friendly rapport to a tasteless state of drought.

Such reeking rank goodness is still an ill-fated flask
and thus have I learned, and find the lesson true,
such drugs can fell the interest of those uncomfortable with truth.

Why is my arse so lackluster and wide,
So determined to avoid any change?
Why, in these modern times, could I not coincide
a snazzy addition on this twin mountain range?
Perhaps a butterfly or a three word bon-mot; what shame,
to keep a canvas pure white as it goes to seed?
Such remorse! I would have myself to blame.
But if I ornament my tush, will regret quickly breed?
O, I know, my liege, I always ask these trifles of you,
And you patiently abide my foolish temperament;
So I guess what I’m asking with old words anew,
Would a newly-inked ass reinvent?
For I know my buns are quickly growing old,
and would appreciate being grandly extolled.

(sooooo not by William Shakespeare)