It’s not often that I am stopped short as I amble down the feminine hygiene aisle at my local Wal-Mart, but I was this weekend. 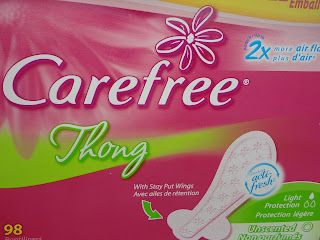 Yes. Someone, somewhere, thought a thong pantiliner was an appropriate idea. That someone was an idiot. Here’s the thing: there are only two reasons why a woman would need a pantiliner in the first place.

One: It’s that time of month.

I never thought this was something I’d have to publicly address, but here we are. If you are someone who falls into Category One, why are you wearing a thong? Your trendy, polka-dot Hanes Hip-Hugger Cotton Briefs were all in the laundry?

If you happen to fall into Category Two and you’ve got leaky pipes, let me be the first to inform you that you have passed the thong stage.

Yes…there is a thong stage. If you cannot cough, laugh, sneeze or fart without dribbling a little in your skivvies, your thong days are over. While I can sympathize with the Gotta-Go, Gotta-Go, Gotta-Go Right Now! phenomenon, I cannot sympathize if you continue to wear a thong.

…now back to your regularly scheduled blog.
Posted by Jeni Decker at 11:14 AM 5 comments:

I’ve been thinking about terrorism a lot lately. (Probably because I just finished Nick Flynn’s The Ticking is the Bomb ) What to do with presumed terrorists when we find them? How do we get vital information out of someone without our American Moral Compass plunging into dangerous territory? And I’m not talking about someone like Dick Cheney’s moral compass. I’m talking about the average forward-thinking NORMAL American who isn’t psychotic.

We all know that America doesn’t torture, or at least we’ve been told that, ad nauseam. We all also know that’s complete bullshit. (SEE: Extraordinary rendition, meaning state-sponsored-kidnapping, or outsourcing torture.)

I’m personally against torture because I’m not so sure we ever get any kind of reliable information from it. I mean, if I was being water-boarded or made to stand on my feet with my arms out at my sides for days on end, I’d toss my eighty-four year old Nanna under the bus to make it stop.

And beyond that...it's just icky, isn't it? Aren't we supposed to be better than that? People in general, I mean. The Human Race.

But then it came to me. Epiphany!

The Dreaded Colonoscopy. First, you’re forced to drink a gallon of vile-tasting swill, 8 ounces at a time - one every ten minutes - until you’re ready to puke.


Then you wait while your tummy-tum-tum begins to gurgle and grumble, after which you spend the rest of the day on the john. You can’t eat anything until after your appointment with the sadist who will blather on about the latest shenanigans on Jersey Shore as he rummages around in your pa-dunk-a-dunk with a tube that has a camera on the end.

There’s not a person alive that wants to be subjected to this fresh hell, but since it’s something four out of five proctologists recommend to their patients when they turn fifty, it can’t be considered cruel and unusual punishment, can it?

And because here in America we’re givers, if it turns out the person being 'tortured' is innocent, they can go ahead and remove any pre-cancerous polyps for them as a parting ‘sorry for the inconvenience.’
Posted by Jeni Decker at 8:32 PM 3 comments:

What’s a Girl to Do?

I could write a poem:

a stir
a flurry
a cascade of echoes

adjectives, like Lawrence’s lover with a pilgrim’s soul
meander among verbs and prepositions
yearn to nail down a simple truth, an alluring oeuvre

present perfect tense delights in its slow, sultry dance
so sit with me in my fin de siècle
and, breathless, I will share my story…

TO: The Architect of Guano: Karl Rove
FROM: A Satisfied Customer

I just returned from one of my thrice-daily bathroom sabbaticals where I read portions of your book, Courage and Consequence, one ‘sitting’ at a time. (I eat a lot of roughage, hence the 3x a day thing.)

Thank goodness I have a hearty septic system because I find your book serves dual purposes: laugh out loud satirical reading material, (it’s satire, right?) and I won’t have to buy toilet paper for a good long while. (that’s what I call recycling!)


“The next time they give you all that civic bullshit about voting, keep in mind that Hitler was elected in a full, free democratic election.”
--George Carlin


"The great masses of people will more easily fall victim to a big lie than a small one."
--Adolf Hitler


"[T]he people can always be brought to the bidding of the leaders. That is easy. All you have to do is tell them they are being attacked and denounce the pacifists for lack of patriotism and exposing the country to danger. It works the same way in any country."
-- Karl Rove
Posted by Jeni Decker at 2:18 PM 2 comments: