The Curious Incident of the Stinky Dog, Vomiting Kids and Hemorrhoids in the Night Time 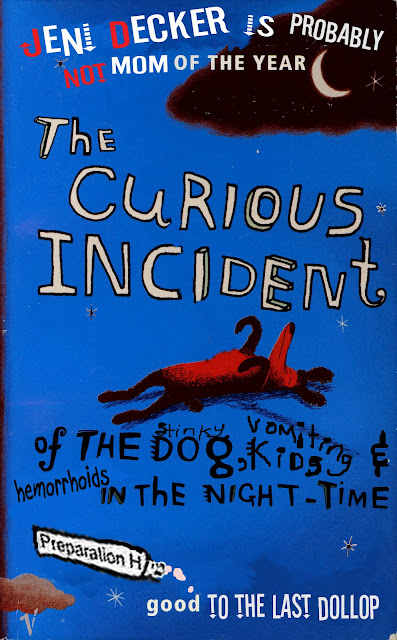 It all started Friday afternoon.

~ Call from Thing Two’s school: “Jeni, I don’t think Thing Two is feeling well. He took himself to the quiet area and is lying under the weighted blanket. He feels warm.”

“I’ll be there right away!”

~ Bring Thing Two home, get a dose of medicine in him, he falls asleep.

SuperMom on the job! Check!

Three seconds later, he bolts upright from sleep and projectile vomits all over the carpet, his bed, himself, the wall, and for his grand finale, me. If you’ve never seen projectile vomit, let me tell you, it’s a thing of wonderment. It sprays from its origin with the force of a fireman’s hose taking down a three alarm fire.

I was disgusted and in awe at the same time.

~1a.m.- I stripped down, made Thing One strip down, and began cleaning the carpet. The kid had three brats for dinner with red Gatorade to drink so his room looked like a gory crime scene, complete with chunks of what looked like brain matter IN THE CARPET!

~ Next day: Two sick kids intermittently puking up medicine just as I administered it. (Which is a Catch-22 situation, as any Mom knows. You need to figure out how much they’ve puked up. Do you risk giving them another dose so they don’t wake up with a fever, or do you wait it out? I always opt for not overdosing my kids, but that’s just me. A trip to the ER with a comatose kid doesn’t make my top ten list of things to do on a holiday weekend.)

We all scraped by during the day. Puke basins were placed around the house at targeted locations. I washed three loads of sheets and towels in between scrubbing my hands 5,348 times, always topped off by a generous slathering of antibacterial hand sanitizer.

SuperMom Status: Withering with every hour that passes.

Seventeen Thing Two baths later, after a few hits to my teetering sanity, it was bedtime again. (Thing Two still wears a Pull-up® at nine-years-old. Because of this, the autistic kid who’s not-interested-in-shitting-on-the-toilet must take a bath after every bowel movement in place of wiping his ass. At least hygiene is a priority for him.)

~ 9 p.m. - Sweet, silent bliss. Husband conveniently spent the day outside, then hightailed it to a friend’s house to drink beer and hang out anywhere else, presumably where vomit wasn’t flying around in all directions. (He did take the pukey sheets out on the front lawn and hosed them off before I put them in the washer.)

With two resting kids, I had an episode of House cued up and ready to go when I heard the dog scratching at the door. I got up to let her in and, as soon as she crossed the threshold, I noticed she smelled like she’d just spent a few unseemly hours inside the vagina of a skanky ho who’d recently finished working a double shift.

Let me back up and mention that earlier (between puking kids and a particularly nasty Thing Two diarrhea incident ) I spent 30 minutes brushing the dog because she’s in the process of shedding her winter coat. Also, I’d vacuumed the entire house three times because golf-ball-size hunks of fur had taken up residence around the house.

“Out!” I screamed and pointed to the door. My sweet dog hung her head - knowing she’d been a naughty, naughty girl - and went back outside. The stench! It took half a bottle of Lysol to surmount the insurmountable smell of whatever she’d rolled in - and the dog never made it past the mud room.

I grabbed my phone and called The Bread Winner, fully aware he wasn’t going to be amenable to the message I was about to leave. Unfortunately he answered. I hadn’t counted on that. (Leaving testy messages is easier than an actual phone confrontation.)

“Hey hon. Just to let you know, Sugar rolled in something that is abhorrent to my general sense of well-being, so before you can enter the house tonight, I’m gonna need you to give her a bath. I left a towel and some shampoo outside. Also, I taped a note to the front door in case you forget.” (Remember, he’s out having a beer… or twelve.)

MY SILENT BUT DEADLY INNER MONOLOGUE: I’ve also engaged the dead bolt so neither of you will be getting in until the job is done.

Yeah, I’m hardcore. Call me a bitch; whatever. Listen, I’d done multiple loads of laundry, vacuumed more than twice, washed every sheet on every bed in the house and disinfected every flat surface. After all that, I’d taken a bath and was smelling all girly and nice, so there was no way I was going to take my fragrant ass out there and get that stinky crotch smell on me.

I heard a sigh on the end of the line. “Okay, I’ll be home later.” Good answer!

~ 11 p.m. - The Breadwinner comes inside, fresh from bathing the dog. She ran past him and proceeded to shake, shimmy and roll her way to getting the carpet nice and wet-dog smelling. Although there was a faint scent of rose emanating from her drenched coat, wet dog is wet dog.

To my credit, I did not yell. Breadwinner HAD bathed the dog and it was my fault I wasn’t specific enough. Next time I will elaborate on the importance of drying the dog thoroughly BEFORE entering the house.

So, now along with the rosy-wet-funk and slightly wet carpet, I had a dog dragging her body over every carpeted surface in the house in order to rid the water from her ears and fur. It sounded like someone was having an epileptic seizure in my living room as she pounded her way to a state of dry-ness that would please her. I noticed, however, that everywhere she dragged and rolled was left matted with fur. No longer were they weightless tumbleweeds, but globs of wet hair; furry landmines all over my living room carpet.

~11:15 - Vacuuming again because my OCD would not allow me to watch TV in peace without my eyes wandering down to the hairy mess on the floor. (Shit, will I ever get to find out what that sexy Gregory House is up to this week?!)

An hour or so later, everyone had fallen asleep, nestled comfortably between clean sheets. I finally got to watch that episode of House before dragging my weary bones to bed. I was out before I knew -

BLOODY FUCKING HELL! I woke up somewhere around 2 am. I believe my hemorrhoids wanted to have a chat; at least this was the impression I got as my anus throbbed and my stomach, legs, and back dealt with evil tendrils of fire wrapping their way around me from the inside. (Because of my distaste for Karl Rove, I’ve decided to hereinafter refer to them as Rovian tendrils.)

This time, unlike the first time this happened, I knew what I needed and exactly how many steps away it was. I slowly hobbled to the bathroom, found the tube, and took care of business. Still, after five minutes, the evil Rovian tendrils of enmity only minimized to a dull, throbbing animosity.

Step two was in the freezer.

This was not the first time I'd foraged behind the frozen peas and popsicles to grab the lime green screw-on lid attached to a protruding six-inch plastic dowel. Meant to keep a sports cup cool for hours, the frozen phallus jutting from a convenient handle had once spent a memorable night talking the little perpetrators in my poop-chute down from the proverbial ledge.

I shuffled back to my bedroom, dropped my panties, laid down on my side and let the icy phallus get reacquainted with my anus.

For the second time in my life I feel it necessary to note that there was no insertion. Again, I want that on record. Anus-adjacent should paint the picture for you, so we’ll leave it at that.

So… how was your weekend?
Posted by Jeni Decker at 2:52 PM