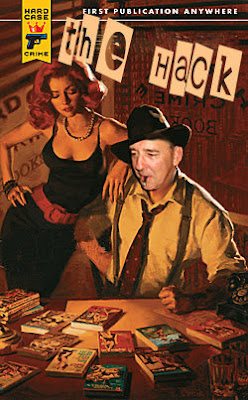 What you need to know about Greg Crites is that he can write a mean story. And by mean, I mean escapist fiction for the masses that includes bigger-than-life antiheros and satirical and/or pop culture related “villains” - who may or may not be a metaphor for all that is wrong (or right) with the world. His writing is a heady feast of linguistic endowment rarely found in commercial fiction today.

Greg Crites is to words what Paula Deen is to butter. But, while both artistes create insanely appetizing fare, the former won’t necessitate a prescription for Victoza - the diabetes medicine for which America’s chubby culinary connoisseur is now the paid spokesperson.

He’d probably never admit this but... methinks Mr. Crites actually has something to say. His work, while entertaining as hell, not only speaks to the pulp zeitgeist and the simple, ironic absurdities of life, but also to universal truths. Thing is, you’re so busy laughing, you don’t pick up on things like exploration of social themes and mores until long after you’ve finished the book.

As an author, I can tell you that’s a good thing.

When asked about the key to his success as a self-published author (by Jeanne Bannon, author of Invisible… read the full article on her blog ) Crites said:

“My stuff is always first draft... I do things the way the Pulp masters did. The guys who wrote Doc Savage, The Shadow, Tarzan, Conan. They got paid by the word and they churned out some words. I don’t do litrachur, which I’m unqualified for. I aim to entertain and I never lose sight of that goal. I keep a steady stream of stories underway. You have to produce. You have to imagine you are a writer for ‘Lost’ and you had better get some words typed or start looking for a real job.”

By his own admission, audio books make up the largest part of his sales, and having benefited personally from his oratory offerings, I can testify to the fact that he’s got a set of pipes Deity-made for narration.

So, without further ado, strap yourselves in and let’s chat with the author, himself. He’s sitting in a comfy chair with a drink at the ready and, now… me in his lap - which is how we’ll proceed with the rest of this interview. 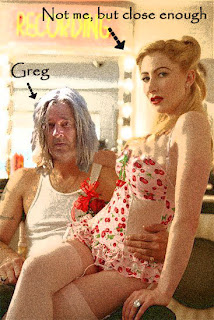 Greg, (may I call you Greg?) I recently read Crusade. Tell the folks out there what it’s about, then kindly explain to us what you have against God and organized religion.

Crusade is my tribute to Hunter S. Thompson. It is my inferior version of Fear and Loathing in Las Vegas. Thompson took a cynical look at America during a period when America really needed someone to take a cynical look at it. Not that it did any good. Or changed any minds. Or elevated anyone to at least try and do better.

I started with outright theft of his premise, two crazed journalists on assignment, and went from there. (Or, it could be based on my actual adventures as a reporter, but the statute of limitations has not yet expired on some of the crap we did.)

This will disappoint the thousands who’ve read Crusade, but I actually have nothing against either religion, or God. It is organized religion that I took to task in Crusade. As individuals, being religious has little impact on civilization, and, is actually a positive phenomena. But, when folks get together and start attempting to legislate or force others to adhere to their beliefs, it’s a negative thing and they should be hunted down and killed. In much the same manner organized religions have done throughout the history of humankind.

As in every human endeavor, greed sooner or later takes over, the greedy realize they need fanatics—and they find them. Contrary to new-age, liberal, progressive, hipster delusions, some folks are just smart enough to become dangerous but not smart enough to contribute anything to civilization. Hence, there always exists a ready pool of borderline imbeciles to whip into a frenzy of fanaticism. All that said, I am a spiritual person in that, I take comfort in the knowledge that there is no way my species sits at the top of the food chain.

I see. Well you put a lot of thought into that answer. I’m impressed. Now, you seem like a guy who would take great pleasure in screwing the man - metaphorically, of course. Any suggestions for the sheeple reading this interview? How can they make a difference in the world around them while simultaneously pissing off the establishment?

Stop electing lawyers. Plain and simple. They complicate everything until it becomes unworkable, thus guaranteeing they always have work. Think for yourself. Analyze, don’t just swallow the popular line. Stop giving money to those whom you know are douchebags. Hit ‘em in the wallet. Works every time. Finally, love your friends, plot to kill your enemies.

I’m sober now, so I’m at a negative 2 or 3. Later, after a few drinks I’ll hover around the ten mark.

Are you comfortable? Here… let me scoot this way a bit. Don’t want your legs to fall asleep. There. Now, tell me about the worst boss you ever had.

Myself. Way too lenient on the worthless fucker I see in the mirror. I could write a book a month if I weren’t a worthless, undisciplined, lazy bastard.


Pretend I’m interviewing you for your dream job (bartender, professional taste tester - anything to do with a bar, alcohol, and/or sardine packaging plant). What are your three best qualities? What should I watch out for, other than theft and imbibing on the job?

Any bar that would hire me is far too dangerous a place to work. That said, for some reason, I feel it crucial that I actually do the best job I can if someone is paying me. I have no idea why. Some kind of genetic flaw. If you pay me to do something, I’ll figure some way to get it done—even if it requires me admitting defeat and suggesting you find someone else to do it.

I enjoy taking broken/non-functioning things apart to try and fix them. Usually I do, and that shit feels good.

I like to wander around and drink beer directly out of the pitcher.

Let’s talk politics. If you could pick - er, scratch that. I don’t have time for all the railing against the machine I assume your answer would include. How about this: Tom or Jerry? Why?

Foghorn Leghorn! Because I love that voice and ain’t that all that counts? In this society don’t we all worship the strong delivery of platitudes and vagaries full of sound and fury yet signifying nothing.

Why are you so drawn to me? And, feel free to make use of your mental thesaurus for adjectives and adverbs.

I’ve always been fascinated by Scientology adherents and Kat told me you’re like a twelfth degree moonbat soon to be elevated to Exalted Unicornucopia of Abundance. A level which is rumored to be the highest attainable short of metamorphosing into an immortal butterfly.

As an amateur scientist with no credentials, no formal training, no qualifications, and no slavish need to adhere to long-accepted scientific best-practices, my empirical observations of others always yields verifiably funny lines.

If my feminine instincts are correct - coupled with the full sixty-two seconds it took you to come up with that answer - I believe you may have been trying to decide between a moment of intimacy, and humor. You chose humor. That’s fine. I’ll let it slide… for now. Next question: If you were invited to give the commencement speech at Harvard’s graduation ceremony this year, what advice would you have for the nubile minds about to embark upon the rest of their lives?

Young scholars, we beg thee, hie your numerous skills to another country and elevate them to the next level in civilization. You’ve done enough to us, and collectively, we can’t thank you properly.


To follow up on the last question: What would the hospitality rider in your contract for said speaking engagement look like? (Dietary restrictions, requested items, etc.)

Two bottles of Sailor Jerry rum on ice, an eight-ball, and a fully-charged cattle prod.

I assume the cattle prod will be used when your heartbeat goes on hiatus. I feel you squirming… don’t worry, just a few more questions. How would you design a spice rack for a blind person?


What’s in your refrigerator right now?


Based on your answers to the last few questions, you may not be long for this world, so I've decided that you and I should write something together before you break on thru to the other side. So, what do you think? Fictional tell-all, tele-novella script, collection of poems, manifesto… whatever. If you can curb your enthusiasm for the drink enough to add another project to your list, and I can curb my enthusiasm for Twitter, what do you think we should write?

Done! But I’m gonna need that in writing, so I’ll have my people forward your people a contract immediately. One last question: What is the meaning of life?

Unadulterated joy, indeed. You have been a pleasure, sir. Let me hop off your lap so you can regain feeling in your lower extremities.


I recommend working your way through his massive oeuvre slowly and with great diligence. 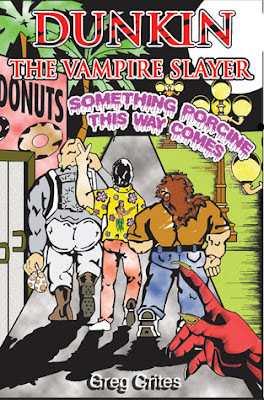 On that note, you can get the first of his vampire series, Dunkin the Vampire Slayer: Something Porcine This Way Comes for FREE on Kindle right now.

IN THE INTEREST OF FULL DISCLOSURE: While preparing for this hard-hitting interview, I came across this ridiculous website and shamelessly appropriated a few of the questions. I thought the one about the spice rack was brilliant.