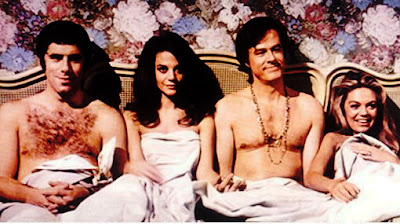 So, what do you think when you hear the term "swinging?"

I immediately think of the movie Bob & Carol & Ted & Alice, or 1970s style key parties as depicted in the movie The Ice Storm. Then, naturally, my mind progresses to sordid scenes with arms and legs akimbo, naughty bits all tangled together in one squished up delightfully debauched—

Ahem. Excuse me, I'm going to need a moment—

Oh, who am I kidding. I get frazzled with one person eyeing me naked. Add one or two more people to the mix and I'd be in full-on panic attack mode before anyone could scream Muskrat!

Note: Muskrat is the safe-word I've chosen in case I should ever need a safe-word during my lifetime. I like to plan ahead, even for eventualities that aren't likely to transpire. I've also written my Academy Award speech, in the event I somehow end up co-starring opposite Morgan Freeman in a romantic comedy.

Anyway, I think I could be a voyeur, if I were allowed to watch the goings-on from behind my hands, occasionally peeking between my fingers - the same way I watch tampon commercials and rated-R sex scenes.

Don't get me wrong, there's no judgment here. I think consenting adults should be able to do whatever they want, and shouldn't have to explain themselves to the moral majority. Let your freak flag fly, people. Just be sure to write about it once your finished so I can live vicariously through you. 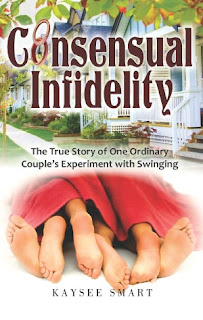 Which brings me to today's interview. The book is called Consensual Infidelity: The True Story of One Ordinary Couple's Experiment with Swinging, by Kaysee Smart.

Here's how Wikipedia defines swinging: (What? Your immediate impulse when you need to consult an authority on sex isn't Wikipedia?):

Swinging or (rarely) partner swapping is a non-monogamous behavior, in which singles or partners in a committed relationship engage in sexual activities with others as a recreational or social activity. Swinging can take place in a number of contexts, ranging from spontaneous sexual activity at informal gatherings of friends to planned regular social meetings to hooking up with like-minded people at a swingers' club. It can also involve Internet-based swinger social networking services online.


As I scroll down the Wikipedia page, I'm reminded of the All in the Family episode where Edith meets a couple whose names she finds in a "friendship" magazine. Cut to her inviting them over for coffee, only to learn they expect her and Archie to partner-swap.

Archie: Swinging! Is that what you call it?

Male Swinger: Yeah, what do you call it?

"I hadn't even had my husband's tongue down there until after we'd been married for five years."

Suffice it to say that if you spew iced mocha in the vicinity of your e-reader, that goo isn't coming out of those little crevices around the keys very easily. My Kindle is still sticky.

Consensual Infidelity was such an enlightening read, I asked the author and her husband if they would do a blog interview. Since the book is written from "Kaysee's" perspective, I wanted to put "Justin" in the hot-seat first. Which is where he now sits - bound, with his wrists behind his back. Kidding! I'm kidding… He's answering these questions from safety of his home, with the exact amount of distance most men in this situation would want between themselves and an inquisitive interviewer.

So "Justin," here's the question you posed to your wife one night, which eventually led to your swinging experience: "Have you ever thought about having sex with a woman?" I'm wondering if, at any point, you said to yourself: "I never thought she'd say yes! What have I done?"

JUSTIN: I didn’t have any expectations of a yes or no.

Where did the initial question come from?

In the book, we learn that at some point, while scanning a swingers website, you learned that you might have an easier time finding "couples" rather than just adding one other person to the mix. Was that a segue you were immediately comfortable with? Take us through the thought process, as well as any apprehensions you might have had about that.

JUSTIN: I was pretty comfortable with it. I realized that it made sense. Apprehensions would be eased if both the husband and wife were involved. When I got to know how that world operates, it made sense.

There is a part in the book, a very poignant moment actually, where the swinging relationship takes a more serious turn. It is at the point that all four members of the couple get together, when previously you separated as couples to have sex. I wondered what the difference was for you, specifically, being in the room, and in hindsight, was it something you were prepared for?

JUSTIN: Separate rooms were comfortable, like going on a date. When it went to the four person thing, I thought I would be okay, but it was more emotionally powerful than I was ready for at the time.

When you finally read the book, what did you think?

JUSTIN: The book was good. It accurately depicted what happened. There were a few little things that I saw differently, but I understand how Kaysee saw it through her eyes.

Now for some questions for both "Kaysee" and "Justin."

What was the most positive experience you had during your swinging experience?

KAYSEE: Two answers come to mind immediately: the effect on my marriage and the feeling that somebody “gets me.” Throughout the swinging experience, I felt like Justin was not only my husband, but my confidante and my partner-in-crime. I couldn’t share this enormous secret with anyone but him, so my focus shifted from girlfriend talk time to husband talk time. We had so much to talk about!

The other terrific outcome was the relationship I had with Leslie. She and I got to talk about the frustrations of keeping secrets because our beliefs were so different from mainstream society. She was also the only girlfriend I could talk to about my unusual sexual experiences. Yes, it’s bizarre that I would talk to her about sex with her husband, but her enjoyment of the discussion is what gave us such a close bond. I loved the time she and I spent together.

JUSTIN: It made my relationship with my wife better.

What was the most negative experience you had during your swinging experience?

KAYSEE: Chapters 29-35. It’s so painful to think about, I’d rather not rehash it here.

JUSTIN: I was disappointed with the lack of understand from the other couple. When things got tough, the relationship changed. I think they immediately started planning their exit strategy. It would have been better if there was better communication from them.

How did swinging affect your marital relationship?

KAYSEE: I mentioned earlier how Justin and I connected through our secret conversations. We also reconnected sexually. Having sex as a focus in our social life translated into more sex between the two of us. As I mention in the book, I walked around town with sex on the brain, finally understanding what most men must feel like every day! While the sexual experiences with other people were great, the sex between the two of us was the best.

JUSTIN: I think it made it better.

During my research, I came across a website where a swinger defined swinging as "a way to experience the bodies of people besides your partner, while not having relationships with them." But that wasn't exactly the case with you two. Was yours more of a version of an "open relationship"? Do you think a swinging relationship would be better or worse if the actual "relationship" bit were left out, and it was only concerned with the physical? Why or why not?

KAYSEE: The thought of sex with strangers is scary. I don’t think I would feel safe. The fact that we knew our partners on a social level made the sex easy and fun. We had an open line of communication, so I knew I could say what I needed at any time. I think sex with strangers would be more awkward for me.

JUSTIN: Our relationship with the other couple was a friendship relationship. That’s what worked for us. The quick and dirty version isn’t any “worse,” it just depends on the feelings of the people involved. Some people don’t want to get to know people they’re having sex with and that’s fine for them. Ours was not an “open relationship” because it wasn’t random. It was more of a closed setting with just the one other couple and us.

KAYSEE: Morality does come into play. Justin and I discussed it at length before ever meeting anyone. We define “faithfulness” as a loyalty to one another. We are in love and we have each other’s back no matter what. Having sex with someone else does not make us unfaithful because it’s an experience that we’re sharing together. The strengthening of the marital bond that we experienced cannot be immoral.

I believe that promiscuity is considered immoral only by convention. Somewhere along the way, society decided it was a bad idea to have sex with multiple partners. And it is a bad idea if you’re not smart about it. Promiscuous people having loads of babies they don’t want and can’t care for is immoral. Using multiple sex partners for acceptance or revenge or power is immoral. When a single person or a couple has sex because it’s fun and feels good and brings them closer together, how can that be immoral?

JUSTIN: It’s similar. But in the swinging world, there are rules and structure. With a single person having a one night stand, anything goes. Morally, it’s up to the people involved. In the swinging world, no one is trying to impress their morals upon anyone else. Also, if you’re participating, you’ve had that talk with your partner, you’re on the same page.

The book outlines your relationship with one other couple. Is this something you'd consider doing again? Why or why not?

KAYSEE: I’m so glad we had what we had. Unfortunately, there are a lot of down sides. This lifestyle is simply not acceptable to most of society, so it’s stressful to be secretive about it. The process of searching for a great couple is emotionally demanding. If someone handed me an awesome couple and nobody cared what I was doing, I would pick it up again in a heartbeat.

JUSTIN: Yes, I probably would consider doing it again.

Do you have any advice for people considering trying swinging on for size?

KAYSEE: Yes! Start with a strong, stable relationship. Talk about all your wishes, expectations, and boundaries. Be ready for a wild ride. Remember that your relationship with your partner is much more important than anything else. Have fun!

JUSTIN: You have to start with a strong marriage and good communication. There’s no owner’s manual. You just have to have your own experiences and work through them with good communication. Consensual Infidelity is a real life experience that people could read to get a feel for what it might really be like. Even though everybody’s experience is going to be different, it’s helpful to learn what other people have gone through.

I want to thank "Kaysee" and "Justin" for taking the time to do this interview and I recommend the book. I found it very interesting.

Finally, for all of you Archie Bunker fans out there, here's a clip from the Archie and the Swingers episode. It's one of my all-time favorites.