Life Minus 3 ½ By Dennis Hart 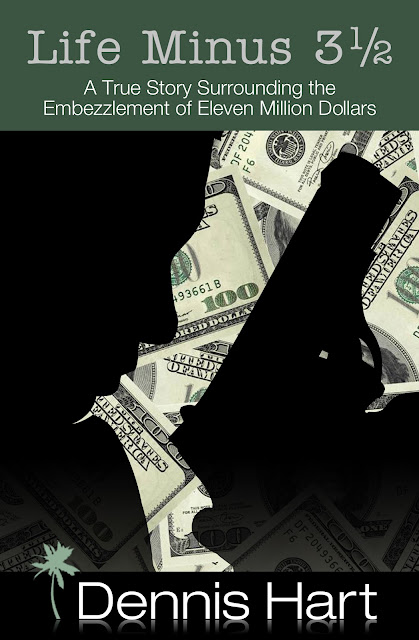 “There is nothing more unnerving than having a gun pressed firmly against your head while a fat fucking moron wearing some cheap cologne sits at the other end of it, making jokes as his sausage-like finger massages the trigger.”

Yeah, that’s quite the opening line. The fact that it’s a true story makes it all the more intriguing.
Like my own twin Doppler radars, which tingle when trouble is afoot, Dennis Hart has a “trouble magnet” which pulses ominously when things are about to get real. Real like being threatened by bookies and embezzling millions of dollars from your place of employment.
That kind of real.
The first few chapters outline the demise of the authors’ first marriage — one he humorously likens to an alien abduction — and a life plagued by feelings of inadequacy.

“It was the summer of 1979, the last year I can remember smiling with any sincerity…”

The gambling begins when, off a co-worker’s tip, Dennis begins playing the options market – sneaking $5,000 out of the matrimonial checking account as start-up capital. His first venture pays off to the tune of $1,750 in a few weeks. Then, as quickly as he made the first $1,750, he lost $6,000. What started as a snowflake, turned into an avalanche. Each day he’d check his portfolio and each day he’d think it would get better. He did quite a bit of creative finagling to keep his wife in the dark and for a while it did get better. A lot better. Then he made a pact to keep it to himself until he'd reached a profit of one million dollars.
Not a thing could go wrong with that scenario, right?
Add to this, upheaval at work involving a start-up company one of the co-workers asks Dennis to join, secretly. Thinking he’d be a millionaire soon anyway, it wasn’t much of a stretch to jump on the mutiny train.
All aboard!
New company, new pressures, and new ways of gambling culminated in him having numerous touts and bookies he was bringing bags of cash to each week.
From here on out, I was the clichéd guy in the heartburn commercial, popping Tums with the turn of every page. It gets bad. Like MILLIONS, bad. I can’t even imagine how he was functioning at this point. So let’s ask him, shall we?

So, Dennis. First off, I feel the need to ask: How are you? Are you in Vegas playing blackjack right now?

I’m doing just fine, Jeni. LIFE Minus 3 ½ tells a story that is over twenty years in my rearview mirror, so I’m over it, but I think I’m the only one. Right now I’m not in Vegas playing blackjack. I’m clipping coupons from the Sunday paper. To suggest I might be in Vegas is a silly assumption on your part. Vegas is not a place I frequent. I prefer Foxwoods for the occasional night of twenty-one.

I’ve always thought that addictive behavior didn’t simply occur in a vacuum. It’s clear from the book that a terrible lack of self-esteem played a big part. Do you feel like your gambling issue popped up out of the blue? Do you have any other addictive behaviors – other than popping M&M’s with the frequency and urgency that someone with bladder control issues visits the toilet? Is there anyone in your family with addiction problems; gambling, substance abuse, or the like? I guess I’m wondering if you think there’s a genetic link.

Unlike most people who spread their iniquities between smoking, drinking, and drugs to name a few, the accountant in me decided to create one big habit in the hopes of making it to Broadway someday.  I’ve never smoked, taken drugs, or indulged in the spirits. After living my life without vices, I’d agree gambling came out of the blue, just like getting married at seventeen did. I think it shows that we all have a malfunction waiting to happen. No one in my family ever had any addiction problems and I made sure by drilling down my research to my grandparents who came over on the boat. And please leave my M&M’s out of this.

After an initial scene that played like something out of Goodfellas, you relay with painful specificity how a little options trading turned to sports betting and the acquisition of bookies and touts. It’s unbelievable the amount of money that you stole, gambled, and lost. I found myself holding my breath at times. By the time it all came to a head, I was almost relieved when you got caught. Did it feel that way for you, too?

Actually, the initial scene played like one out of The Godfather. I figure I wagered in the neighborhood of thirty-five million dollars over seven years with up to six bookies. I won somewhere around twelve million and lost around twenty-three million. It was the perfect storm for disaster. A guy with a self-esteem problem due to an early divorce and lack of respect meets up with a company with a severe lack of control over their cash. Add a sprinkle of options excitement to suddenly make me feel as invincible as Spartacus, and a whole lot of illogical sports gambling and you have a recipe for ruin. Let’s not forget my inherent magnets, trouble and bad luck, that guided me down that path of destruction.

Yes, I suppose I felt the weight of my misdeeds fall off my shoulders when the Fatal Calls were placed, but as soon as that relief was gone, another weight climbed aboard called…prison sentence.

For anyone who hasn’t had the pleasure, the scenes in prison are fascinating. What, if anything, do you feel like you learned from the experience, other than not to drop the soap?

There isn’t much to take away from my time in Allenwood Prison Camp, other than to say I left with a sad appraisal of the human experiment. I mean the characters I met, good and bad, you just can’t make up. And this was a minimum security joint. I can’t imagine what really happens in the higher level facilities.

Dropping the soap is pure Hollywood. What’s real is walking into a shank because some dude thinks you’re a rat. Even in minimum security, you sleep with one eye open.

I have to give props to the wife. You two are still together, right? To what do you attribute her staying power? (Lots of gifts and ass-kissing better be in that answer, somewhere…)

Yes, we are still together, although she scratches her head daily wondering why. Maybe she believes, as the masses do, that the eleven million will show up one day. Now there’s a losing bet.

What are you working on now? Any new books on the horizon?

LIFE Minus 3 ½ was my first serious attempt at writing. When it was done, I found it compelling and hoped it might reach someone in need. After receiving praise for my writing skills, I started wondering if I could create novels. I have a thriller finished titled Pictures of Children which deals with a subject matter that appears almost daily in the newspapers. It is presently in the query stage. I’ve also completed Gulf Boulevard; a humorous adventure which I’m proud to say has been picked up by a literary agency. It’s about a burned-out accountant who wins the lottery, quits his job, and moves to a barrier island off Florida’s west coast to live the life of a hermit. Unbeknownst to him, a mafia hit-man is hiding on the island after a botched hit. Hey, write what you know.

And finally, I’m now working on the sequel to Gulf Boulevard because people tell me it’s that damn funny and they want more. There you have it.

Jeni, I want to thank you for this opportunity to hang out my dirty laundry. You can find my book on Amazon for Kindle and the paperback will also be available shortly.

For more information visit my blog at: writingsbyhart.com 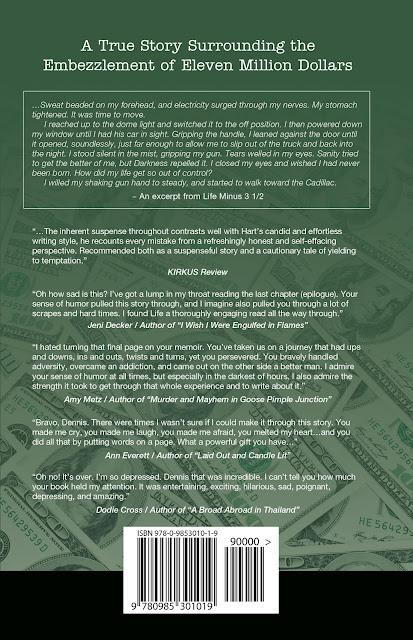