Words; across the universe… 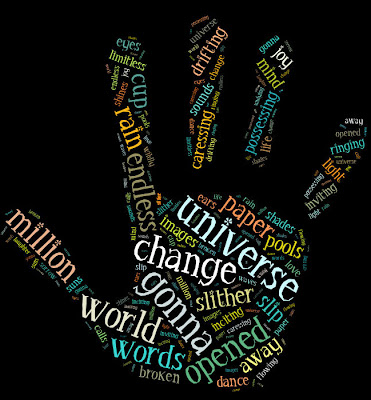 It’s Wednesday, days after the massacre at Sandy Hook Elementary, and today, for the first time, when I dropped my kids off at school there were armed police officers at every entrance. I guess it wasn’t something I was prepared for, visually; happy children skipping to class in the final, fun-filled days before they are off for the Christmas holiday, set against the backdrop of a solid police presence.

I may have had a minor panic attack as I drove home. Minor; just a few heart palpitations accompanied by sobbing.

And then one of my favorite songs came on the radio: Across the Universe by the Beatles. It’s a beautiful song, haunting and thought provoking, if you care to listen to the lyrics. Simple, yet sublime.

“Words are flowing out like endless rain into a paper cup, they slither wildly as they slip away across the universe. Pools of sorrow, waves of joy, are drifting through my opened mind, possessing and caressing me…”

Being a writer, words have always had more power for me than anything physical or visual could ever hope to accomplish. Just last night, after finally getting a handle on my sorrow, I broke up again listening to a letter from a schoolmate to one of his deceased friends, a letter left in a tiny casket. A six year old chose to leave his words with his friend, for eternity.

Words; we choose not to hear, words we over-use, words left unsaid, words that speak volumes.  Words have the power to heal, provoke, comfort, sadden, support, build up, tear down, bring together, rip apart.

A friend recently said to me, offhandedly, “Sometimes words are just words, Jen.” I thought about it a lot and I don’t think words are ever just words. They’re too important. They are an integral part of the construct under which we all communicate. I choose a word, a few words, a phrase, and the simple act of doing so means something.

Whether consciously or otherwise, every syllable counts. Why else would I choose one word over another?

It all means something…

I wasn't even finished writing this blog post when I received an e-mail from a school official explaining the police presence at my local schools this morning:

But police and school officials were quick to say that students and staff are safe. The student has been removed from the school while officials investigate the validity of the comments and whether or not the student actually intended the comments to be threats.

Reed City Chief of Police Chuck Davis said that the department has been investigating reports from students, a school employee and a local church official regarding comments from a student. Davis has been working with Reed City School Superintendent Steven Westhoff to determine the validity of the threats, including interviewing the student’s parents and classmates about some of the stories floating around the school and Reed City community.

Westhoff and Davis both say they do not believe there is any real danger or that the student intended to carry out the threats, if any were even made. Davis said his department is investigating each allegation. However, in light of the tragic school shooting in Connecticut last week, the school is taking every precaution necessary, said Westhoff.

“We will do everything in our power to make sure the school is safe no matter what, despite the fact that we have not been able to find any factual information to support that this was a legitimate threat,” he said. “Everything is being done in the interest of safety and we are taking this seriously.”

I don't think I've even begun to process the article, or what it means within the context of my own little universe. All I know is that my universe is but a tiny part of the greater universe, one that you and I and every other living person are tasked to care for in a way that I'm not sure we're doing such a good job at, presently.

While searching for the Beatles version of the song to share with you, I came across a version performed by one of my favorite artists, Rufus Wainwright.

I think the accompanying video is poignant under the circumstances. Take a moment out of your day to check it out. It’s as fitting a visual tribute as I’d ever be able to come up with, because the words… today, they are my words…