Watch with shock and awe! I promise you won't be disappointed.

Oh, and if you wish to partake of the book and/or audio downloads:

http://katnovian.com/
Posted by Jeni Decker at 12:27 PM No comments: 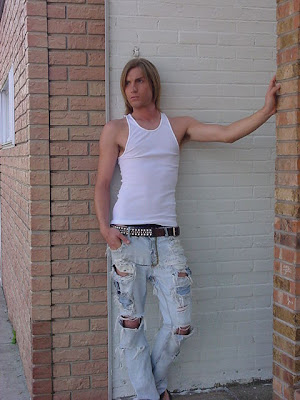 Well, we are almost finished with our newest short film project, Macy's Wait, about a young man waiting for that 'negative' call during the horror show we like to remember as the mid-1980's. You know, that time when a Mr. Reagan was in office and those in his administration referred to AIDS as the 'gay plague' when joking amongst themselves at press conferences, about three years BEFORE the big guy even said the word out loud.

Yeah, that shining beacon of a moment on a shit-storm of a hill.

Ok, so the first treat you're privy to on listening to Global Swarming, other than that hot beat, are the vocal styling’s of Greg Crites, who frankly sounds like a cross between a pirate with a three pack a day habit, and the guy who services my A/C.

Very accessible, very sexy, very...'I want to hear more but am concerned about the fact that his gravelly voice is turning me on slightly and in general I'm not even partial to men.' But that mix of hot music and husky voice is apparently a recipe for something naughty, or so my girly parts seem to be whispering.

So I guess that's a bonus, except that for the duration of Chapter One, a hog's carcass is being dismembered and that frightening mix of naughty and nasty might be the reason I'll have double therapy sessions next week.

But, I let go and get into the moment, because this is a Zombie story so 'Something Inappropriately Wicked This Way Comes' is, after all, expected.

Thor and Lilly are getting a divorce. When Lilly's lawyer informs Thor that she wants half of the butcher shop, he's none too pleased about it, continuing to hack away at the animal carcass on the slab in front of him.

Lilly, herself, is what my Nanna used to call her sister--'real heavy furniture'. I know this because I was privileged enough to read subsequent chapters of this story. She's a cumulous cloud of sarcasm, and together she and Thor are the perfect storm.

Check it out. Global Swarming is one guilty pleasure that can be afforded in our ever-constricting economy.