Man Up! (Ode to Rachel Maddow) 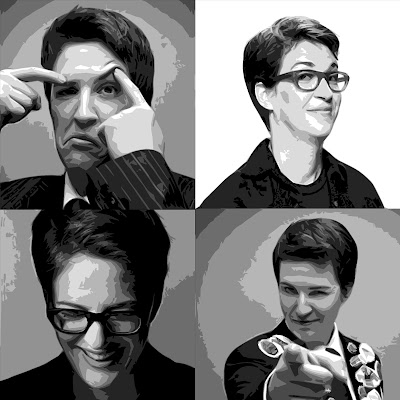 You know you have too much time on your hands when you spend your Friday making a horribly off-key song parody video while sitting in your car waiting for your kids to get out of school. This one was inspired by a wonderfully epicene political wonk and her Thursday segment about the Koch Brothers.

It was a coincidence eerie enough to make me wonder if I needed to update my spyware and my life insurance policy. See, I’d spent the day working on some chapter segments for the sequel to Waiting for Karl Rove - tentatively titled Waiting for a Plot. Yes, Kat Nove and I are hard at work writing book two, and on that very day I’d been writing a scene about the Koch brothers and their involvement in the current 2012 election run-up.

Satire + fiction + a sprinkling of facts (divided by) what might or might not be happening behind closed doors = humorous conspiracy theories that have the ability to saunter a bit too close to reality for my good taste.

You’ll have to wait and read the book to know what I’m talking about.

At any rate, I settled into my comfy recliner and tuned in to hear Rachel Maddow challenge Charles and David Koch to “feel free to man up.”

See, that’s the difference between Rachel and I; why she has a show, while I merely have a tiny little inconsequential blog. She simply, succinctly, sublimely (alliteration, suck it!) told the Bro’s Koch to “feel free to man up” while I’d have told them to “feel free to…” do something that involved a lower orifice accompanied by a few badly-chosen naughty epithets.

Her way was much more effective…

Holy Sh*tballs, Batman! She just told the overlords of the beltway to f-ing MAN UP! Boy, oh boy - I’m one smitten kitten. Ms. Maddow has my full attention. If she shows up for work on Monday with all of her appendages intact, Kat and I should be OK with what’s going into Waiting for a Plot.

Rachel, this one’s for you. Keep up the good work!

The Not-So-Great Debates: The Politics of Fear and Self-Loathing

To actually debate something, it helps to have people who have vast differences of opinions be the ones asking the questions. Also, it helps if those questions are a bit more probing than "wall or no wall".

As it is, all we get from the current crop of GOP presidential "debates" is a look at which might be the lesser of 7 or 8 evils. We’re forced to peruse the political meat on the chopping block and decide which cut is furthest from its expiration date by the heady scent of disingenuous decay wafting through our TV screens. Unfortunately, their collective stench mingles into a festering potage; it’s impossible to determine where one stink ends and another begins.

I suppose I sound jaded; angry even. And I fully cop to being a liberal, but you know what? I would welcome some diversity - would love to see a Republican contender who was close enough to the middle - where I honestly think the majority of Americans hover, politically - to give the Democrats a run for their money. Why? Because a good candidate from each side going up against one another in a fair fight is what this country deserves.

I think we’ve earned it.

We deserve better than a candidate who had a racial epithet painted on a sign outside his family hunting camp.

We deserve better than a candidate who thinks “praying the gay away” is a viable option.

We deserve better than someone who belittles the marriage discussion by using a pathetically moronic metaphor involving a napkin and paper towel.

We deserve a candidate who doesn’t change his or her stance on any given topic with the regularity that they change their undergarments.

We deserve to have a media that doesn’t follow faux candidates around and monitor their every word and self-promotional sound byte.

Instead we get a plate full of crazy with a couple of self-serving teasers à la carte.

As time goes by, it becomes more and more painful to watch these debates and whistle-stop stump speeches, particularly when you consider the reactions from the audience members - a throbbing mass of sign-toting hysteria permeated by fear and loathing.

This kind of vitriol only comes from one of two places: fear and/or ignorance. I choose to believe these people are not all stupid. That wouldn’t be fair. So one can only assume that the candidates, as well as their “followers” are filled with a fear that is so absolute, so ingrained, they can’t see how truly self-centered it is to assume that everyone should think the way they do - that diversity is a bad thing, a blight upon the American existence, rather than what the Founding Fathers actually intended the American melting pot experience be.

Based on some of the things these candidates have said (with a microphone present) it’s not hard to imagine what their inner monologue sounds like:

Those gays want to drag American morality to hell in a frilly hand basket with all that marriage talk and… stuff they do to each other. Insert collective GOP shudder here. What about those horrible, scary, jihadist Muslims - evil, all of them, bent on our imminent destruction. And don’t even get us started on those filthy Mexican immigrants stealing all our jobs. Gays, immigrants, non-Christians, terrorists, liberals, women seeking to decide what they do with their own bodies, union workers, a middle class who insists on fair and balanced taxation - it seems the majority of America is the enemy of the GOP.

The sad truth is, the grubby little not-so-secret psychology from which the wellspring of the New Right Wing originates is an omnipresent blanket of fear that envelops their entire agenda. Consumed with paranoia, intolerance and gluttonous self-indulgence - everything from the Muslim down the street who threatens the very fiber of their way of life, to their fellow (wrong-thinking) American who dares fight for their own nugget of the American dream - every imagined “enemy” endangers their inalienable rights given to them by God; their God.

Any other God need not apply.

It is a group simmering in a belief system that stems from Old Testament rage. One can’t be sure whether we should pity this new breed of Republican or declare the lot of them enemies of the state. It would be easy to feel sorry for them, and even easier to ignore them entirely, if it weren’t so dangerous to do so.

So America is held hostage, rapt attention diverted toward debates that are a cross between a deranged carnival and a fifteen car pile-up where the audience rubbernecks its way past the collective mayhem.

That’s the Republican I want running against Obama. I’m just not sure there are any out there anymore.

I find myself thinking about that eternal line from Anne Frank, and the context within which is was written:

It's difficult in times like these: ideals, dreams and cherished hopes rise within us, only to be crushed by grim reality. It's a wonder I haven't abandoned all my ideals, they seem so absurd and impractical. Yet I cling to them because I still believe, in spite of everything, that people are truly good at heart. I simply can't build my hopes on a foundation of confusion, misery, and death. I hear the approaching thunder that, one day, will destroy us too, I feel the suffering of millions. And yet, when I look up at the sky, I somehow feel that this cruelty too shall end, and that peace & tranquility will return once again.

I am loathe to compare the politics of any party to an ideology that ended, historically, with the deaths of millions of people, but there is something to be said here for the comparison if it is used metaphorically and applied to what we are seeing played out, daily.

If we can all agree on one thing, I would hope that it would be that the politics of fear and loathing have no place in America.

I wonder, though, if we can even agree on that, anymore.
Posted by Jeni Decker at 12:51 PM No comments: