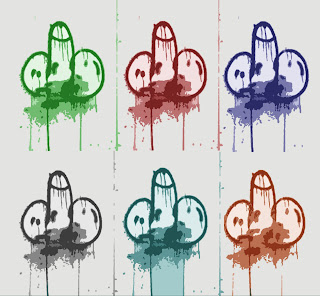 
Okay, I guess I’ll (grudgingly) take a minute from pimping WAITING FOR KARL ROVE to do my mom a solid… and perhaps I’m biased because she wrote it (and I’m a character in the book) but I think you should check out The Grateful Undead: They’re So Vein (Black Matrix Publishing).

Mommie Dearest (as she’s known in Waiting for Karl Rove - SHAMELESS PLUG ALERT!! Available now on Amazon.com!! - wow that minute passed fast, huh?) based the main characters on herself, my sister and me, my eighty-something Nanna, and my aunt JoAnn. Yes, she too has committed the ultimate in literary horrors - writing herself (and family) into a work of fiction.

But, I have to ask - what’s funnier than a octogenarian who suddenly finds herself undead, with a vociferous appetite for sex and the lingering mentality of a senior citizen? (Except, perhaps, potty-mouthed fifth-grade cartoon kids a la South Park, and since there’s a Vampire tyke in the story who’s got quite a dirty mouth, she’s covered all the bases.)

A fresh take on the oft-bitten vampire milieu, They're so Vein is a book that illustrates (hysterically) what happens when all (except one) of the estrogen-producing members of one family suddenly find themselves blood-suckers.

The characters are each funnier than the next: Susan is their bitchy leader, who got them all into this undead mess, but couldn’t care less since she’s now wrinkle-free and has perky tits.

Then there’s her sister, JoAnn, who can't quite get on board with the whole "drinking-human-blood-thing." She ends up screwing with the eco-system by feeding on animals and accidentally turning them. PETA would be pissed.

Susan’s eighty-something mother keeps bringing home men half her age, and is having a love affair with her battery-operated sex toy.

And the kids… one daughter who’s happy to play the fanged version of a kick-ass action hero, while the eldest daughter (me!) - the only sane one among them - decides to stay human, thank you very much. (This is true to life. I do NOT want to be a vampire. And I am still wondering how I should feel about her writing a werewolf character as my love interest.)

Anyway…it's all fun and games until the "serious" (old!) vampires come knocking, and expect this motley crew of newly-turned idiots to pay for their every Vampiric transgression. Sex, blood, and heads will roll...I think you’ll find They’re So Vein a funny, enjoyable romp.


Oh, and while you're over at Amazon.com, don't forget to pick up a copy of Waiting for Karl Rove...do it for the children, people. (My children. You know - the two autistic kids who need new video games, food and, (unfortunately) little Jax still requires pull-ups due to his toileting issues. Those puppies are EXPENSIVE! Ha!)

Both books will make you laugh, and isn't that what we need a bit more of in this world? A little bit-o-funny, yes indeed.
Posted by Jeni Decker at 8:00 AM 1 comment:

Last Will and Testament

To Whom it May Concern,

If I die or end up in a stupid coma & become a vegetable (I hope yam or tomato because I don't want to be spinach) then my half of the proceeds from sales of Waiting for Karl Rove shall go in a trust fund for Thing One (Jake William Lopez) and Thing Two (Jaxson Walter Lopez) - because I have blatantly exploited them for personal gain, so it would only be fair.

This windfall, however, should be administered by their step-grandfather Bob, because my mother, sister, and husband cannot be trusted with such a chore. Mommie Dearest would drive everyone crazy, husband would buy way too much pay-per-view and beer, and sister would instantly bury herself under a ten-foot high mound of scratch-off lotto tickets.

If something happens to Step-Dad Bob before an anvil falls on my head or I slip in the shower, the above duties will then go (grudgingly) to Resi Decker (sister with lotto fetish) with the IMPLICIT STIPULATION that no lotto tickets, hair color, or chocolate shall be purchased with the proceeds from Waiting for Karl Rove under the guise of “Thing One and Thing Two management”.

If a fishing/hunting accident, terrorist attack, home repair accident should befall Step-Dad Bob AND Resi Decker, AND The Breadwinner, simultaneously, then I REALLY GRUDGINGLY pass the buck to Mommie Dearest and hope like hell she doesn’t drive Thing One and Thing Two batshit crazy while lording over their money. She will...(sigh) but I will have no other options at that point.

If everyone above dies, I guess a stupid meteor hit the earth and it won't matter, anyway. (Which would be a damn shame.)

This official half of a contract between Jeni Decker and Kat Nove* is electronically signed on April 15, 2011 by:

Jennifer L. Lopez (YES, this is my legal name, so stop laughing, NOW!)


*to see her official half, go to katnovian.com
Posted by Jeni Decker at 8:00 AM 1 comment:

No More Tears from the Clown

Ring the church bells! Sing a chorus of Hallelujah!

Glenn Beck has LEFT THE BUILDING !! (His “imminent departure” not imminent enough for this gal.)

I break here to dab the corner of my eye with an American Flag hankie. I'm feeling a bit verklempt.

No doubt, he’ll pack up his conspiracy chalk board, the mountain of Kleenex hidden under his desk, his teetering sanity, and zip them all up in the suitcase of unmitigated hubris he calls "truth".

Beck often vacillated between describing himself as a “voice of truth” (she coughs into her hand, “Bullshit!”) and “an entertainer” (if sobbing, retching, ranting, conspiring, and whining is considered entertainment) - though this writer would describe him as a “blathering idiot with sociopathic tendencies" who had no place in prime time on a news network (even if it's a Faux News network), to begin with.

But, I’m nobody, (just an average American) so my opinion doesn’t matter.

I will shed no tears for this clown. This is, most certainly, a happy day. Now, if we can just get rid of Limbaugh, O’Reilly, and Ann Coulter, the world might begin to spin a bit more soundly on its axis.

Here's his 'announcement'. If this video doesn't scare the beejezus out of you (or make you laugh hysterically at the irony), nothing will...

And... here’s a video I did a while back about the absurdity of American ‘politics’ and my personal disenfranchisement. (Glen makes a wacky appearance.)

It’s a fitting tribute to The End of Glenn Beck.