Thanks for the Sperm!

Well, certainly it starts there, but when it comes to Dads, it doesn’t end there - or it shouldn’t, anyway.

Let me introduce you to my dad: Melvin Decker. He spent most of his life as a mailman (now retired) and has the scars to prove it. I bet you didn’t know that being a postal carrier can be hazardous to your health, but it can. From the little things like paper cuts and dogs chasing you as you try to do your job, to the big things like cancer - which can happen when someone spends the better part of their life with half of their body hanging out of a vehicle in the hot Florida sun. Yeah, Dad’s battle scars took the form of a cancerous growth on the side of his head and eventually he had to have half his ear removed.

All of you people who got your mail delivered in a timely manner can thank him now.

I’m just glad it was removed and he’s in remission, though that heart attack he had last year wasn’t exactly a picnic for him, I’m sure. He’s had his personal crosses to bear and he’s always born them with dignity and his trademark dry sense of humor.

Dad had the distinct pleasure of only siring female children, and I’m pretty sure he’s purchased more than his fair share of tampons. Yes, he’s the type of guy who will go up to the store at night if called upon, and not complain about it.

I also remember him being woken up well after midnight once, and driving me to the beach to fetch a few of my stranded friends. Again, no complaining. (Out loud, anyway.)

I was always bad at math and I remember sitting in the back yard one year, going over my ‘7’ multiplication tables with him. For some reason, I had the hardest time with those damn “sevens” and now they’re the ones I can count off with ease:

He also had the horrific task of popping my knee back into place when it dislocated, which happened no less than four times before I had it surgically repaired when I was in seventh grade.

I vividly remember doing an unsuccessful one-handed cartwheel in my neighbor’s front yard and landing wrong. Horribly wrong, in fact. What followed was mind-numbing pain and instant nausea, and a kneecap suddenly located on the left side of my leg; not a position a knee is ever supposed to be in. It doesn’t look pretty and feels even worse.

The pain is unimaginable; the worst pain I’ve ever experienced (no less than four times). This is saying something because I’ve since given birth to two big-headed kids AND have a permanent case of painful hemorrhoids to show for it. Neither were (are) as painful as my knee dislocating.

Wherever he was, Dad would come running, pale faced at the sight of his eldest daughter on the ground with her leg wrenched into a position that no leg is ever supposed to be bent. He’d calmly take my calf in one hand, cup his other hand over the out-of-socket knee and say, “Ready?”

I’d nod, on the verge of puking, and he’d firmly jerk it back into place. I still get sick to my stomach when I think of it and, looking back now, I know that beneath his calm exterior was inner tsunami of emotion he had to keep in check… for me.

The picture below is just one time when either my knee went out or I knocked it in just the right place that it caused me to faint. At the time, we were at Niagara Falls, I believe. I’m lying on a cool rock, recovering.

There are way too many memories I have of my father for me to share in one blog post but, on this special day, I want him to know that I remember them all, and love him dearly.

Not to get too mushy, but to this day, he’s still one of the best men I’ve ever met.

Some pics, oldies but goodies:

Me and my sister, Resi

Resi, Mom, Dad, and me behind him (with the “haircut that dare not speak its name”) NOTE: My sister could always pull that shit off; I, however, never could.)

Posted by Jeni Decker at 4:20 PM No comments: 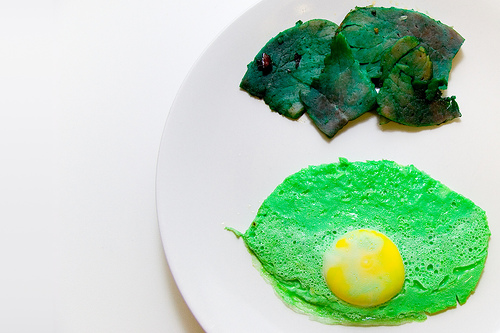 Human junk they say I am.
They do not like me, Spam-I-am.
So what if I don’t know Voltaire?
I don’t think that’s here or there.

I don’t give a tinkers dam,
I’m representin’ Uncle Sam

Have you seen my big ’ole house?
Or my sporty, hunky spouse?

How I hate every lame-stream louse,
Can’t they appreciate my nice blouse?

Did you see my appearance on FOX?
The rest of the media can suck Todd’s co*&!

Only on Fox…Only on Fox…
Not in Wolfe’s house. Not with that mouse. (Rachel Maddow!)

I do not like bagels and lox,
but I will eat them live on FOX.
I do not really trust my spouse,
but I’ll fake it till I hit the White House.

I couldn’t care less if you hate who I am.
Just, please, follow me with your video cams.

A brain! A brain! I’ve got a big brain!
How ‘bout a misquoted quote from Mark Twain?

I would not, could not, stop in the Bronx.
I heard “those people” would give me small pox.

What did you say! There in the dark!
That’s no place for my bus to be parked!

I would not, could not, step on the F Train.
Around minorities my interest does wane.
I’m not comfy with disenfranchised peeps,
I do not like mediocrity.

Did you ever read Green Eggs and Ham?
Seuss was a fascist, wasn’t he?

Could you, would you, buy MY books?
There’s lotsa big words, just take a look!

You will not like them? So you say.
Try them! Try them! And you may.
Buy them and you may, I say.
Do it for the USA.

Posted by Jeni Decker at 1:44 PM No comments:

AMERICA NEEDS TO EXPLAIN HERSELF.

Two writers on a mission to discover as many real Americans as possible - average farmers in the Midwest; bar owners in New Orleans; kids whose parents came over illegally years ago and who now serve in the military; elderly native born Americans who only speak Spanish; gay advocates in San Francisco; football fans; opera lovers; rodeo clowns; Muslims; Jews; Atheists; mimes...

America needs to tell us why we're all in this together.

If the “One Nation” bus is still on the road, we’ll catch up to that rolling behemoth and choke down their exhaust fumes as we tail (stalk) the Palins around the country. With a camera in hand. Hopefully we’ll get pics of Todd or Bristol or Sarah filling the gas tank.

In honor of Sarah Palin, we’ve dubbed it the “Blatant Self-Promo Ho's Tour.” Please, won’t you send a poor retail worker and a tired mother of two autistic kids on a whistle-stop tour of America this summer?

Remember, we’ll only get as far as YOUR money takes us.

PS: We’re happy to plaster ourselves AND our bus with YOUR ads, so if you’d like to sponsor us, click on the notSarahPAC picture in the sidebar and head on over to the site!