My son Jake has OCD. In fact, since hitting his teens, he’s practically teeming with hormones and his obsessions have multiplied; like the explosive acne that is sure to follow. For Jake, it materializes in the form of rapid-fire questions that he simply must get answered before he’s able to move on to the next thing.

If he can’t wrap his head around something, he will be asking about it all day.

Well, last week he spent an entire school day obsessing about a frog.

When he plopped into the passenger seat and I pulled out of the school parking lot one afternoon, this was the first thing he said to me:

“I lost a square today because of a frog.”

Losing a square, in the context of his world and classroom, means he got a warning. Squares on the whiteboard, used as visual cues, keep track of how many warnings each student in his ASD classroom has, and once they loose three, they get lunch detention.

“Okay, tell me about the frog.” This ought to be good, I thought. I immediately conjured that Looney Tunes episode where Michigan J. Frog kept making a fool out of his owner. Every time they were alone, the frog would hop out of its box and sing, “Hello my baby, hello my darlin’, hello my ragtime gaaaaaaal…” But whenever the guy tried to show someone his singing/dancing frog, it would just sit like a lump and croak. 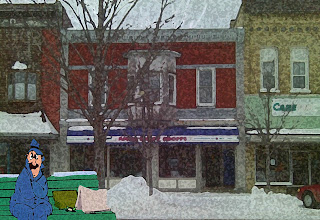 “I saw these two high-school kids kicking a frog and I wanted to go rescue it but Chris said that we should just tell Mrs. D. and—”

First I needed to acquire some context. Frog? Where? Inside the building? So I interrupted - which he hates - and found out this happened immediately after I’d dropped him off, earlier that morning. The high school and middle school are attached by a library, so the middle school kids have to pass the roughhousing high-schoolers in order to get inside the building. Apparently the little amphibian hopped too close to the wrong crowd.

“Well I think Chris made the first appropriate choice this morning,” I said.

“But I wanted to hit those stupid kids and rescue the frog and bring him inside.”

“First, we do not hit. And messing with high school boys is asking for trouble. Second, we do not bring any animals of any kind into the school building. Ever. Do you understand?”

“No buts. Your friend Chris did a good job giving you advice this morning. What would you have done with the frog if you brought it inside? Where would you have put it?”

“I was gonna take it to my science teacher.”

A giggle started to bubble up from somewhere inside me. The sadistic giggle of a mother about to shine the ugly light of reality across the face of her innocent autistic child. “Uh, Jake… What do science teachers typically do with frogs?”

He looked at me but hadn’t put two and two together to equal formaldehyde… yet. That would require a bit more prodding on my part.

“Do you know what dissect means?” I asked.

Jake’s eyes widened considerably. “Oh no! I wouldn’t want him to dissect the poor frog! I dissected one once and now I have guilt about it.”

“I didn’t. I dissected one by myself. In the basement. When I was ten.”

The LOUD RECORD SCRATCH in my head was immediately followed by a laughing jag that was so boisterous, Jaxson - who was sitting in the back seat playing his DS - raised both hands and yelled, “Guys, guys…CALM DOWN.” (Yes, very clearly. His speech is coming along quite nicely!)

Because I’m getting over bronchitis, I coughed up half a lung, grabbed the antibacterial from Jake - who is on constant on germ patrol - and managed to swerve back into my lane.

“Oh Jake. I love you. But why did you dissect a frog? And how did you kill it, or was it dead when you found it?” I didn’t even want to ponder what implements of torture he’d used.

“I dissected it while it was alive.” Jake mumbled. “I won’t go to hell, right?”

The other half of my lung came up, and out came the hand sanitizer, again.

“No, honey. You won’t go to hell. But you won’t be dissecting any animals outside of science class anymore, right?”

“I’m NEVER dissecting ANYTHING again! I have a passion for animals now.” Jake yelled.

I sighed and wondered how that would go over when the fetal pigs came out in science class in a few years. I remember them being particularly gnarly.

The morning after what will now be referred to as The Frog Incident, I had a meeting with the school psychologist, speech therapist, behavioral specialist and a few other regulars - just for a check-up on Jaxson‘s progress. (Which is rolling along splendidly, I might add!)

But, the first thing on the agenda - because the same staff treats both of my kids - was, “Did you hear about the frog episode yesterday with Jake?”

We had a nice chuckle and I learned a bit more about the story. Like, as soon as he’d entered the building and rushed to his ASD room, he relayed the frog story to his teacher, who promptly took him outside in order to see if they could locate the frog and put Jake’s fears to rest. I think she hoped they’d find the little bugger alive and well and that would be that. I can only imagine what would have happened if they’d encountered a pile of frog pulp.

The school psychologist arrived soon after to head up the ‘social interaction’ class. This is where Jake and his fellow socially inept brethren learn about conversing with others, discuss personal space and facial expressions, and other things that you and I might take for granted. As she exited her car, she saw Jake pacing up and down the sidewalk, watching his teacher look for the frog that would remain on his mind for the rest of the day because the frog would never be found.

And that’s the story of how a frog caused Jake to lose a square.

Today's video--The beginning of our journey...Moving to Michigan and all the changes for the kids.

STAY TUNED! for the next blog post which will include a video showing Jaxson's first developmental evaluation and first day of pre-school in the Early Intervention program.