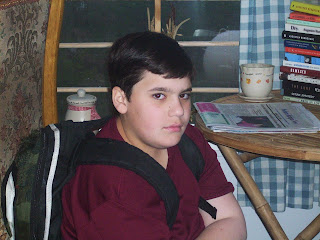 (This is the back to school face.)

T-minus six days until my boys go back to school.

Next Tuesday is going to be rough. When you know there’s a good chance you’ll be physically dragging your 77 lb. child into school on the first day, and probably for many days thereafter, it makes it hard to rise to that giddy level of ‘Back To School’ elation that plagues the Wal-Mart and Staples commercials for two months every year.

In fact, those commercials aren’t even advertising the products I need.

“Now, for a limited time, when you order your HoverRound-Up™ - invented for the little second grade cherubs in our midst who have to be rolled into school like Hannibal Lecter - you’ll get the Mommy-Nerf®, squishy full body armor, available in sizes up to XXL. If your Lil Tyke punches, bites and kicks when they’re anxious, this product is for you!”

Perhaps I should start drawing up some prototype schematics.

Thing One and Thing Two hate school. (Try and look at that like a Seussical reference, not a totally inappropriate one.)

I’d like to say I’m one of those parents who is relieved when my kids go back to school - happy to enjoy a quiet house and do my chores before partaking of a few hours of uninterrupted writing time. This is not the case. I worry when they’re not with me. As soon as the alarm goes off on day one, up and until the last day of school, I spend most of my life waiting for the other shoe to drop in the form of a call from school. Either Thing Two is acting out and three para-pros have him pinned to the floor, or Thing One is obsessing about one of the fifty-two thousand things he obsesses about on a daily basis - like his penis falling off - and they can’t get him into class.

It’s heart-breaking, gut wrenching, toilet hugging stuff. The ‘I Just Dropped My Two Autistic Kids off at School Diet’ consists of lots of coffee and a fair amount of time on the john.

Yesterday, we (Mom and I) went to register the boys for school and Thing Two lost it before I could get him out of the car. He doesn’t even want to look at the elementary school building, never mind go in for five minutes while I fill out his forms. Because Thing Two is not very verbal, (but making great strides!) he can’t say: “Mom, I’m frightened and I don’t know how to deal with this.”

There is no ‘talking him thorough it.’

After the parking lot meltdown, the hallway meltdown and the library-slash-registration-holding area-meltdown, we got back into the car fairly unscathed, only to have Thing Two melt down while we waited in line at the middle school for Thing One to get his picture taken for his school ID card.

Mom remained with Thing One (who was also over-stimulated and stressed) while I cajoled Thing Two out to the car, a guerilla maneuver that ended with two sweaty, slightly mauled and out of breath people - one adult, one child.

God bless my little Thing Two. He’s terrified. And it’s not like I can say, “Okay, honey, just stay home with Mommy.” Man, that would make things easier. But, kids have to go to school and I fear if he can’t pull it together, there’s no telling where he’s going to end up. I want to make something better for him that is out of my control. So I round up the troops, talk to the psychologist and pediatrician, make a plan, and hope everything comes out in the wash.

Till then, my ass spends plenty of quality time on the toilet. Luckily I’m reading a good book.

But, then, there are other moments. These truly sweet gifts that make everything a little more okay than they were fifteen minutes earlier. In the evening, after the chaotic day, Thing Two had settled down and was giggling as he made his Buzz Lightyear fart on his Woody action figure - and, of course, filming the process with his video camera.

Thing One looked at his brother and said:

“Mom, he’s just trying to find his place in the world, isn’t he?” Sometimes Thing One says something so profound, I want to cry. And these little gems stand out because most of the time he’s saying things like:

Farts are the great equalizer in my house.
Posted by Jeni Decker at 11:04 AM