I’m perfectly aware that I’ve put my family through the ringer when it comes to my elementary filmmaking endeavors. Forget about the mountain of footage I have of my kids. The adults in the family have not been safe either. I had no problem tossing my octogenarian Nanna into the mix.

But tricking Nanna into thinking we’d just tossed the box formerly known as her husband into the gator-filled lake behind my Mom’s house was probably the one that would make most people cringe. Not me. Nothing is sacred in our family, and to her credit, when our little plan didn’t go as we’d hoped, Nanna manned up like a good actress and did take two.

Here’s part four, but for parts one through three, you can check out her YouTube page:

My sister Resi has played everything from a gun-toting redneck in a horrible Godzilla spoof, to a blushing bride marrying a homosexual groom twice her age, while decked in Pepto-Bismol puke pink. She’s actually the only real actress in the family, or at least the one that does it well. 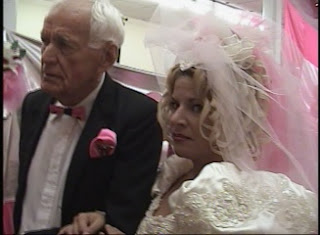 But, when Mom and I get together, and it’s the middle of winter with nothing to do, we eventually pull out the HD cameras. The Bait Pile was mostly improvised when we realized neither of us could remember our lines or stick to the script. We wrote, directed, acted, ran the cameras and edited it ourselves, and it's the only one of our films that managed to make it into a film festival - though to be fair, their motto that year was: “The films nobody else will show.” But hell, it premiered in NYC at a small venue on 42nd Street so we were pleased as punch.

Below, find my mother and I together in all our glory - a montage of madness from various things we’ve done together, including The Bait Pile.

WARNING: The Barbie-Porn discussed in a previous blog post is featured -selectively - but as far as I’m concerned, if a little doll on doll action offends you, you probably aren’t my target audience, anyway. (in which case I'd say to you:)

For God's sake, lighten up. We could all die tomorrow if some crazy dictator in China or Iran decided to push the button - get some perspective and a sense of humor. I promise, it'll do you good.