Would the Devil Get a Publishing Deal? 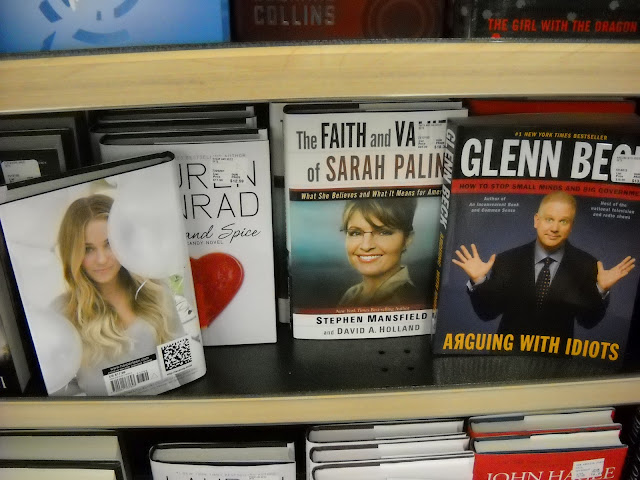 Sigh. There are at least three things wrong with the photo above and their names are Conrad, Palin and Beck, in order of appearance from left to right.

Sigh, again. Really? I had to google the Conrad chick, because although I recognized her face, I didn’t even know from what show she’d been spewed forth, I only knew where she’d ended up. Published. I suppose I should be happy it was her and not that Heidi Montag Living Barbie, because had I seen her face while walking down the aisle at Wal-Mart, I might have had a spontaneous cranial bleed.

For a writer it’s difficult to see faces like the faces above and know that some of them hit the NYT Best Seller List. For the love of God, Katie Couric couldn’t even nail down whether Sara Palin reads newspapers on a regular basis, and now she’s a New York Times Bestselling author?

Then there’s Glen Beck and his book Arguing With Idiots. Reading between the lines, I assume he’s had lots of practice arguing with himself.

Who the hell is reading this shit? Seriously. I get it. Publishers will publish what sells. That’s not what concerns me. Publishing is a business, just like television. If we gobble it up, they're gonna serve it up hand over fist.

So, I’ll ask again: who is reading this shit? The same people, I presume, who are watching all that reality TV, buying Snuggies ™ and eating sugar-free foods laced with aspartame. We can not complain about the offerings on TV, movies and books if we're the same people following Snookie's every move or watching Glenn Beck's show and believing everything (or anything, really) that comes out of his wacky mouth.

We're the problem. And why do we watch/read this stuff? Is it the whole 'train wreck' thing? (READ: Mid-term elections have caused everyone to lose their minds because some REAL TURDS are running for office - homophobic turds, turds who dabbled in witchcraft, etc.) I see too comfortable a correlation here and it disturbs me. The loudest wackadoo in politics - do we support them just to ensure an entertaining news cycle once they're elected?

Is it just fun to watch someone humiliate themselves, watch someone's marriage disintigrate before our eyes (Jon & Kate + 8 - 1), or watch some young person's hopes and dreams become shattered (American Idol try outs). Does anyone else find this whole disturbing trend...yucky? OR is it just me?

So as I’m preparing this blog, I google Heidi, praying, I mean really PRAYING that she didn’t have—

Oh, you’ve got to be f-ing kidding me with this! She and Spencer wrote (I am playing fast and loose with the word ‘wrote’ here, clearly):

How to Be Famous: Our Guide to Looking the Part, Playing the Press, and Becoming a Tabloid Fixture

So, it appears the surefire way to get a publishing deal (or get elected to a Senate or House of Reps. seat) is to say something stupid, do something stupid, or be someone stupid. And yes, I am bitter. A bitter ,bitter girl. But I did find a way to purge the pent-up bitterness threatening to overtake me. I rearranged the bookshelf at Wal-Mart. With a bit of quick work, I was able to move every copy of the above books to the bottom shelf and put other books in front of them.

I considered it a public service. My way of paying it forward to the shoppers who would follow me down the aisle that day. Grocery shopping is a daunting enough task without having to ponder the pervasive absurdity of whether the Devil Himself would get a publishing deal.

Come November, we might have an even more frightening 'reality' show going on in America. I predict a high number of new CSPAN viewers.
Posted by Jeni Decker at 8:00 AM