A Few of My (Least) Favorite Things 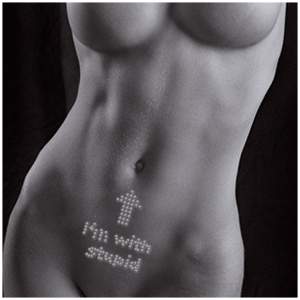 Seriously, do we have an ETA on when that stupid trend is going to peter out? Because I think America’s been dumbed-down to the point of reckless abandon at this point. It’s been scientifically proven that for every 30 minutes of reality TV you watch, you lose 5 IQ points, so some of you people should be in a cage with the apes at the Bronx Zoo, tossing excrement and sniffing your fellow inmates’ asses.

The only two network shows I watch are The Office and Glee*. (*Wouldn’t life would be wonderful if we all occasionally broke into song with an accompanying perfectly choreographed dance number and flawless costuming? And Jane Lynch is so yummy I could dip her in couscous and wash her down with a glass of chardonnay. )

I probably don’t need to elaborate here. This also goes for FOX News. I prefer my propaganda with a big Nazi flag in the corner of the screen, accompanied by grainy black-and-white pictures of soldiers screaming ‘Heil Hitler’.

3. Seeing your underwear in public.

This applies to persons of the male and female persuasions. Guys, if you think it’s so important for me to see your Joe Boxers, just wear them over your jeans. It’ll look less stupid than having the crotch of your pants dangling somewhere around your knees.

And gals, (I’m talking to you if your jeans only cover half your ass and I can see your thong), if you’re under 25 and wear obnoxiously low-riding pants, you might want to re-assess your fashion sense. If you’re over 25 and embracing tween-fashion, you might need to re-assess your common sense.

AND NOW FOR YOUR MOMENT OF ZEN: 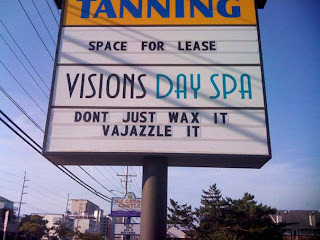 Ladies, have you ever wanted a bejeweled beaver? Well then, get in on the new fad that’s sweeping the nation. Everyone from Jennifer Love Hewitt to Kathy Griffin have gone the way of the shimmering snatch, so don’t be the last one on your block with a festooned frontage. Start Vajazzling*!

(*va-jazzle - to decorate your ‘down there’ area with shiny, glittery gems.)

My Va-Jay-Jay Bling sung to the tune of A Few of My Favorite Things.