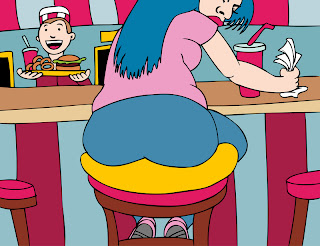 But mostly, I figure if you’ve got an issue that once almost caused you to shove the ice blocks in your freezer - normally reserved for your children’s lunchboxes - into your lower orifice, you might as well get some literary mileage out of it.

If you can’t laugh at your own put-upon-pooper, what can you laugh at…I ask you?

As anyone with a similarly disenfranchised ass can attest, when those little buggers are angry, the pain they can cause is beyond the ability to comprehend. I have been awakened from a sound sleep, suddenly feeling like something untoward happened to my rear orifice while I slumbered - like a brutal ménage à many. Vicious waves of angst filtered up through my innards as I crawled to the kitchen for ice because I’d let the literal tube run dry.

That’s a mistake a ’roid sufferer only makes once. What follows is an early morning jaunt to the nearest drug store, whereby you avail yourself of every tube on the shelf and are only moderately embarrassed as the clerk rings up your seventeen boxes of Prep-H. (generic of course, I’m nobody’s fool.) After you’ve experienced that kind of pain, you could care less who sees you spending $94.76 on off-brand ass cream. You just want to make sure you never run out again.

To this day, even though I’ve got a butt-load (pun intended) of overstock under my bathroom cabinet, I still grab another box every time I’m in the Wal-Mart Supercenter. There can never be too much emergency preparedness in this situation, and I promise you FEMA hasn’t got your back.

I’ve been lucky as of late. I’ve had no flare ups, but it hasn’t been long enough that I’ve forgotten the brutality. I remember praying for death in between suppressing dry heaves and mopping the sweat from my clammy brow. It is a memory that haunts me to this day.

Because he gets a kick out of shit like this, my amazing writer friend Mitch Geller wrote a song about my affliction and I’ll share it with you now. Notice the personal elements he added. A reference to flies (a Jake obsession) and a lighter (Oh, have I not told you that Jaxson recently set fire to his bedroom? I guess a Fire Blog is in order, huh? Stay tuned!)

Jeni is a gal with hemorrhoids
Posted by Jeni Decker at 8:00 AM